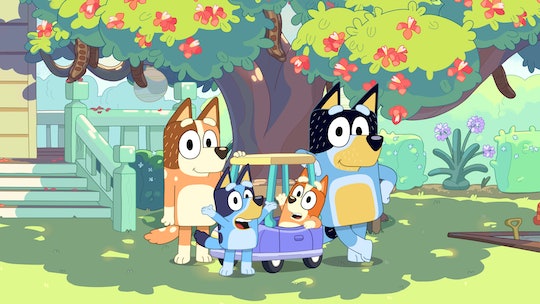 Season 2 Of 'Bluey' Is Premiering On The Disney Channel TODAY

Few things are as satisfying for parents of young kids than finding a TV show that checks all the boxes. Adorable main character? Check. Simple plot lines that kids can follow? Check. Bit of humor to make it palatable for kids? Coming back for a second season? Check and check. For parents who've been wondering when Season 2 of Bluey will premiere, you'll be relieved to know it's coming soon and the upcoming season promises to be as utterly charming.

Season 2 of Bluey is set to hit Disney Channel and Disney Now on July 10, so mark your calendars now, folks. For the uninitiated, Bluey is an Australian show that follows a Blue Heeler pup named Bluey through her everyday adventures with her family and fellow dog pals. It premiered in Australia in October 2018 and has been consistently popular there ever since, perhaps owing to its winsome combination of sweet, family-based stories for preschoolers and universally funny humor parents can actually sit through as well. The BBC-produced show eventually made history as the most viewed series ever for ABC iview, Australia's version of on-demand TV, according to Animation magazine.

The show eventually found even more fans when it hit the United States via Disney Junior and Disney Now in September 2019. It's also available for streaming on Disney+. Now, Season 2 is heading to the United States with more adventures from 6-year-old Bluey, her 4-year-old sister Bingo, dad Bandit, and mom Chilli, and the rest of their dog pals.

Season 2 of Bluey will see a bigger cast of characters, many of whom will be Bluey and Bingo's family and all of whom will be different breeds of dogs in keeping with the theme of the show. It will also give parents a bit of a hand in the game department by introducing some fun and imaginative games kids can play with their parents, like Tickle Crabs, Fancy Restaurant, and Rug Island.

The upcoming seasons will also focus on "Bandit and Chilli’s relationship with their daughters, as they continue to juggle work and childcare," according to BBC Studios. What's more, Anthony Field, the Blue Wiggle of The Wiggles, will voice multiple characters in two new episodes.

"We love that kids and parents are embracing Bluey all across America," Bluey executive producers Charlie Aspinwall and Daley Pearson said in a statement. "It’s really wonderful to see a kids programming from Australia resonating so much with U.S. audiences."

It could be their simple, relatable adventures, the humor. Maybe the accents or the fact that the young characters on the show are voiced by actual children as opposed to adults pretending to be children. Whatever it is, keep it coming.

Season 2 of Bluey will arrive on Disney Channel and Disney Now on July 10.

More Like This
Exclusive: 'Firebuds' Dives Into Hanukkah Traditions In Festive New Episode
Surprise Your Kids With This Exclusive Sneak Peek At Mickey Saves Christmas
Rubble From 'PAW Patrol' Is Getting His Own Spinoff Series Full Of "Messy Demolition"
20 Heartwarming Episodes To Help Prepare Your Child For A New Sibling