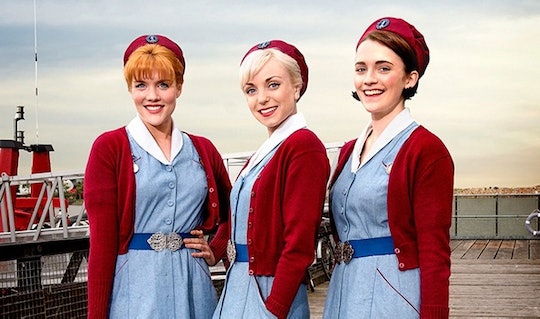 Once upon a time, networks like PBS and BBC were made for older, more non-fiction types of programs but in recent years, they've seen a resurgence of contemporary dramas, even if a lot of them have been period shows. Much like Downton Abbey was so well-received, so was the 1950's and 60's-set drama Call the Midwife. So now that the latest season has ended, fans are probably already asking when Call the Midwife returns for Season 6, because it's sure to bring the drama and intrigue once again along with it. Obviously babies and births are par for the course for the show that centers around a group of midwives in the East End of London, but even still, it's only natural to wonder when the next season will begin so you don't miss a moment of these characters' lives.

Call the Midwife has a history of being pretty consistent with its season start dates and end dates, and according to the PBS website, Season 6 of Call the Midwife premieres on Sunday, April 2, which isn't too far away at all. According to the trailer, there will be the return of some fan favorites, however, sadly Miranda Hart (Chummy) won't be returning like many viewers thought. Unfortunately, the actress wasn't able to make Season 6 work with her schedule. But other than that, the newest season is going to be full of enough entertainment to make up for her absence. I mean, it's going to take place in 1962, which is amazing in itself.

Season 6 of Call the Midwife will likely bring back the humor and drama that fans have come to expect from the series, but since it is a period drama, you can expect some of the pertinent social issues of that time to come up in a big way. Call the Midwife creator Heidi Thomas said in a statement on the series' website, "As the team settle back into Poplar after their South African adventure, we'll see them grappling with all the contradictions and opportunities of the early 60's - the beacon of the pill, the shadow of the Kray twins, the lure of independence and the call to duty."

Thomas also revealed to Radio Times that (spoiler alert) another new case for the midwives in Season 6 will involve female genital mutilation: "I thought this would be a fascinating story, as it would be the first time our midwives would have seen this process." With all that lies ahead, I think it's safe to say that April 2 and Season 6 of Call the Midwife can't come soon enough.