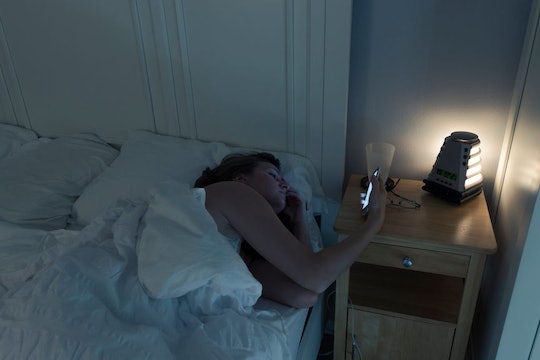 When Is Daylight Saving Time 2019? (Because You Can't Ignore It, Unfortunately)

The phenomenon of being short on time permeates adulthood. Feeling rushed, showing up late, and being forced to choose between events due to packed schedules are everyday hurdles, and with Daylight Savings 2019 approaching in just a few weeks, the reality of missing out on sleep as a result of a social construct we've tied ourselves to looms large. Losing that crucial extra hour of sleep is particularly devastating if you have little ones, but it's an inevitability that can't be ignored.

Unless you're lucky enough to live in one of the two states that don't participate in Daylight Saving Time (that's its actual name, not "Daylight Savings" as so many call it) per World Atlas, you'll be losing an hour of sleep come March 10, 2019 — as that's when the time space continuum is scheduled to be altered this year, according to Calendarpedia. March 10 marks the beginning of DST, when we "spring forward" to gain an hour of sunlight, as we've been in the off season since November. Soon, your phone clocks will jump from 1:59 a.m. to 3 a.m. in the blink of an eye, and who's to say what you could've gotten done in that lost hour? You probably would've just been snoozing, but losing an hour of sleep is no joke.

Daylight Saving Time is a point of frustration for many in the modern age, as the original reasons for its inception don't really hold up for most Americans today. The idea to change time itself came about in Germany during World War I in an attempt to save fuel during the dark months of winter according to Time, which quickly evolved into a capitalistic ploy to increase the number of daylight hours available for activities like shopping and attending events. A 2012 survey found that 66 percent of Americans don't think DST saves enough energy for it to be worth changing the clocks, as reported by Rasmussen Reports.

But it's not just energy concerns that have more and more people leaning anti-DST. A study in the American Economic Journal from 2016 found that Daylight Saving Time causes over 30 deaths and $275 million each year in fatal car accidents, and a study in Reuters found a link between an increase in heart attacks and the day after DST. As much as people like to joke about the negative impact of losing that hour of sleep, there are serious and sometimes fatal ripple effects to the start of DST, giving validity to those who want to end the practice.

Although observing DST is still the law of the land in the U.S., many countries don't partake in the synchronized time switch. Sleep.org reports that many countries along the equator opt out of DST because the amount of daylight doesn't change much in the region throughout the year; parts of Asia and Australia choose not to participate, and the majority of African countries stick with one set of hours for all 365 days as well. As normal as DST is to Americans, there's no real reason it has to continue.

It's unclear if the U.S. will follow in these other countries footsteps anytime soon, but for now, just get ready to be a bit groggy come March 10. But cheer up; National Napping Day is just around the corner.

More Like This
Can You Give A Sleeping Baby A Breathing Treatment? Experts Explain
Feeling Flu-y After A Flu Shot? Doctors Explain Common Side Effects
Here’s Why Your Vagina Itches At Night, According To Experts
An Honest Review Of The Nixit Menstrual Disc