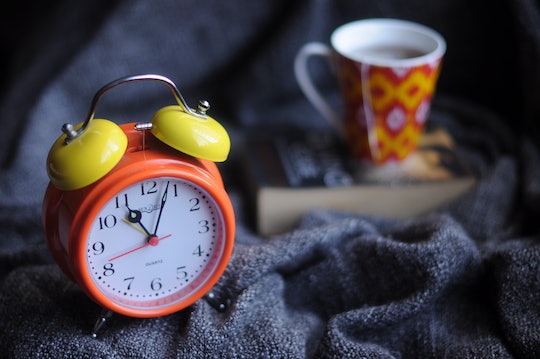 When Does Daylight Saving Time End In 2017? Get Ready To Gain An Hour Of Sleep

Because it falls on a different date every year, the exact moment that daylight saving time switches can be tricky to remember. In fact, there have been a few instances in which the time change slipped my mind entirely, until I woke up and realized half my clocks are at odds with one another. So when does daylight saving time end in 2017? The time to fall back is coming soon.

Get ready to reset your clocks this weekend, in fact. Daylight saving time (DST) will end on Sunday, November 5, 2017 according to Time and Date. On the plus side, you will get an extra hour of sleep. But this also means those shorter, colder days of winter are fast approaching.

What exactly is daylight savings time, anyway, and why does anyone use it? The practice has a long and somewhat controversial history. Saddened by the number of people who had their curtains drawn against the morning light, William Willett of Britain published a pamphlet that advocated advancing time in the spring and reversing this change in the autumn, according to the BBC. He called the practice British Summer Time (AKA daylight saving time). At heart, Willett wanted others to have more leisure time in the sunshine, and he also suggested the practice would lead to lower utilities costs. Although his pamphlet titled Waste of Daylight (1907) gained some momentum for Willett's ideas, he passed away before any major time changes were made.

But the cost-saving aspect of Willett's idea caught on in several countries, and the United States first implemented daylight saving time in some areas from 1915 to about 1919, according to TIME. However, not all American cities observed the time change, leading to general confusion for travelers and businesses. Several phases of following or abolishing daylight saving time took place over the years, but it wasn't until 1966 that the practice of daylight saving time was officially passed by Congress legislation, according to History.com. Fighting with clocks twice a year has been the reality for most Americans ever since.

In an increasingly plugged-in, always-on culture, does the extra daylight even matter to most people? It does appear that daylight saving time benefits certain industries. For instance, Americans tend to use the later hour of light for more leisure activities. According to Michael Downing, author of Spring Forward: The Annual Madness of Daylight Saving Time, gas consumption, as well as outdoor hobbies such as golfing, have experienced serious increases in profits as a result of daylight saving time, reports The New York Times. It looks like plenty of Americans welcome the extra hour by driving more and playing outside.

But daylight saving time has plenty of downsides as well. When daylight saving time begins in the spring, it often accompanies an increase in workplace injuries, heart attacks, and incidents of cluster headaches, according to Live Science. Experts suggest that the lost hour of sleep in the springtime throws off many people's circadian rhythm, causing health issues. On the other side of the issue, an increase in street crime been associated with the end of daylight saving time in the fall, according to The New Yorker. Although people may enjoy an extra hour of sleep this November 5, even the end of DST brings its own set of challenges with shorter days.