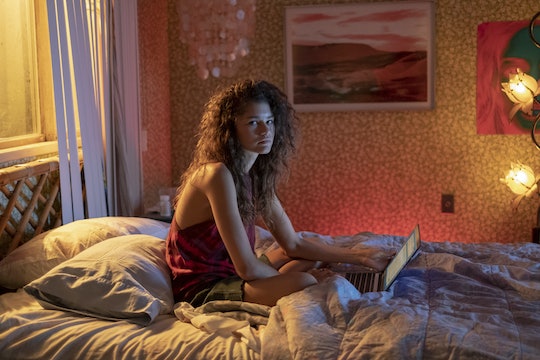 If you watched Game of Thrones or Chernobyl this spring, then chances are, you got the first few glimpses of the upcoming HBO teen drama Euphoria. But it already seems nothing like your standard CW fare and it looks like it will be a much more raw representation of teenage angst. Because of this fresh take that was needed in a sea of Riverdale clones, you’re probably wondering when Euphoria premieres. The newest HBO drama premieres on June 16 at 10 p.m. ET. and was given a 10-episode order for its inaugural season.

According to HBO, the drama follows a group of high school teenagers as they navigate the world of relationships, drugs, social media, sex, and trauma in a more realistic way than is typically depicted on TV. That might be thanks to the fact that Sam Levinson of Assasination Nation wrote all 10 episodes and serves as executive producer. Assasination Nation was a movie that also took a raw approach as it told the story of high school bullying, violence, and gender identity that didn't sugar coat anything for its viewers.

From the looks of it, Euphoria isn't going to make light of anything or paint a pretty picture of what you might hope high school is like for your kids. Instead, it’s probably going to take an approach that will make you want to homeschool your kids right away.

Levinson also created the HBO series which is partly based on the experiences from his own youth. Although the series itself is based on a show that originally aired in Israel, Levinson wrote the episodes with his own childhood in mind. He struggled with addiction himself and he was able to channel some of what he went through into these young characters.

"It’s been a surreal and beautiful experience and it’s ultimately what storytelling is about for me, taking my own... and baggage and giving it away," he told the Los Angeles Times at the Los Angeles premiere of Euphoria. He dealt with addiction and spent time in a psych ward as a kid, which is shown in detail in the show.

But, he explained, through telling his own stories through these characters, it’s his way of making peace with it himself. "It’s a form of communicating with that younger version of myself," he said. "It’s a way of saying, 'It’s gonna be OK.'"

Zendaya, who stars on Euphoria as Rue, a recovering teenage drug addict, described the show to Entertainment Weekly as being mostly, at it's core, "about life." She added that despite the first episode of the series being tamer than the others, it’s still pretty risque. But judging by Levinson's other work, that comes as no surprise. Levinson told the outlet that he channeled a lot of himself as a teenager into Rue specifically and from the drug addiction to very real anxiety, the show touches on issues that teenagers are dealing with everywhere whether those close to them know it or not.

Right now, it’s not clear if the show has been green-lit for a second season, but the few ratings on Rotten Tomatoes have already given a high collective rating of the new HBO series, which is certainly a good sign. Euphoria seems to paint a vivid picture of the struggles of teenagers inside and out rather than your typical cannon issues that you see on other teen dramas on TV. Don't get me wrong — I love Riverdale as much as the next 30-year-old woman who watches teen dramas like it’s her job, but Euphoria is the different take on life as a teenager that is way overdue.