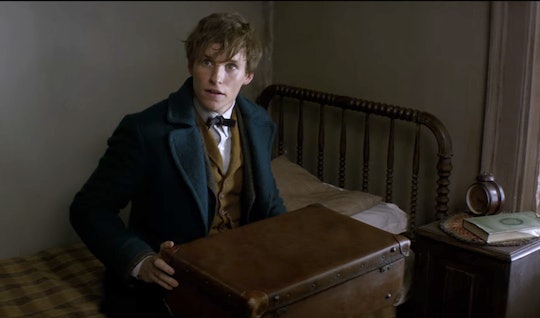 When Does 'Fantastic Beasts And Where To Find Them' Come Out? The Wait Will Be Worth It

Just in case any of you were thinking of skipping out on the MTV Movie Awards this weekend... don't do it, okay? Trust me, you're going to want to check out the show for many perfectly valid reasons like the hairstyles (and how to copy them), dresses (and who is wearing them), plus plenty of epic trailer debuts for all your favorite movie franchises and book adaptations. More specifically, the MTV Movie Awards will be offering us a sneak peek at one movie we're all dying to see. So when does Fantastic Beasts and Where to Find Them come out?

For those of you who haven't read the Harry Potter series more times than you might care to admit publicly (a-hem), Fantastic Beasts and Where to Find Them was written by J.K. Rowling in 2001 as a sort of companion piece to the epic Potter series. The fictitious book is actually featured in the first book of the series, Harry Potter and the Sorcerer's Stone, as a highly useful text used in the students' Care of Magical creatures and Defense Against the Dark Arts classes at Hogwarts School of Witchcraft And Wizardry. In the Harry Potter series, Harry, Ron Weasley, and Hermione Grainger use this text to deal with magical creatures in their various adventures.

Rowling wrote Fantastic Beasts and Where to Find Them under the pseudonym "Newt Scamander." Over 80 percent of the proceeds from the book, which follows the author "Newt" as he travels throughout the world looking for magical creatures, benefited Comic Relief. Rowling also notably developed the movie version of the book herself and even wrote the screenplay. Essentially, it's going to be pretty amazing, and fans should be incredibly excited.

The movie, which will be released on Nov. 18, is set in New York City, 70 years before Harry Potter is even born. Which means He Who Shall Not Be Named hasn't ruined everything yet. Writer and magizoologist Newt accidentally sets a few fantastic beasts free and must find them before any Muggles see them, and of course mayhem ensues. More good news, this will be the first time we see the Wizarding World in the United States (by the way, there is an actual Magical Congress of the United States of America and I bet it's way more fun than regular Congress).

I, for one, will be glued to my television on Sunday night (which won't really be any different from any other Sunday night, if I'm being honest) to make sure I catch an exclusive glimpse at Fantastic Beasts. After all, it combines all of the best things in the whole world: magic, Eddie Redmayne, New York City, J.K. Rowling and fashion from the 1920s. (Maybe even Dumbledore, guys we could totally see Dumbledore!) And maybe, if we cross our fingers, we might catch a glimpse of a Hippogriff or a Boggart. Just be cool, everyone. Be cool.