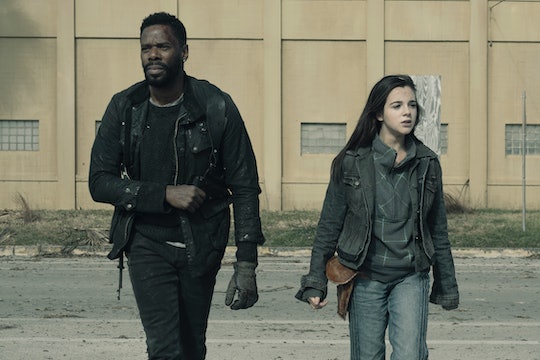 Those who are left on Fear the Walking Dead went through a lot during Season 4, but somehow the season ended on something of a high note. The majority of the episode teased that Morgan was going to lead the group across the country to Alexandria, a la The Walking Dead, but in the end, they decided to stay local and set up their own community for a little while. It wasn't a total shock, because I didn't expect the two series to meet up so soon anyway. But fans are likely wondering when Fear the Walking Dead Season 5 premieres and chomping at the bit to know where the survivors are now.

According to TVLine, Fear the Walking Dead Season 5 premieres on June 2 at 9 p.m. ET. AMC’s official description for Season 5 says that the group will start off by trying to follow their philosophy of helping others and making their new world a better and safer place. But eventually, they will be forced to face certain fears that will leave them changed and questioning their new way of life. It all sounds very ominous and a little different from the note of hopefulness with which Season 4 left off. Hopefully, Alicia, Strand, and the other survivors can find their way together without turning on each other.

Co-showrunner Andrew Chambliss told Entertainment Weekly that it’s not going to be as easy as the group might think to continue with leaving the boxes at different locations to help other survivors. "While the group sets out at the end of this episode bright tailed and bushy eyed, filled with hope, thinking they’re going to help people, what we want to explore in Season 5 is just how difficult that might be in this world," he revealed. "Because of external obstacles, but also because of internal obstacles. These are characters who still have a lot of work to do on themselves."

He added that the characters' individual redemption arcs are going to play a big role in Season 5. That likely means that instead of any of them doing a complete 180 and abandoning the group and the mission, they might be more determined than ever to be better people — even if that gets a little difficult at times.

That begs the question of where that leaves Alicia in Season 5. Like the rest of the group at the end of Season 4, she was totally down with the plan to be good people and work on the mission to help other people. She even said that she wanted to build a place for themselves to call home like her mom wanted to do. But that might be a little easier said than done, especially since Alicia has her own demons to work though. She is the last remaining member of the Clark family and besides Strand, she’s the last original cast member left. Like the others, she has plenty to work through.

It might also be a little difficult for Morgan to continue to support their original message of helping others like Al had tried to do. Throughout both The Walking Dead and Fear the Walking Dead, Morgan struggled to figure out who he is and what his purpose is in this new world. It’s possible that he might still have some soul-searching to do.

Regardless of where the survivors are when Season 5 picks up and where they find themselves by the end of the season, their mission is clear. Hopefully, they can stick to it without too many of them dying off in the process.