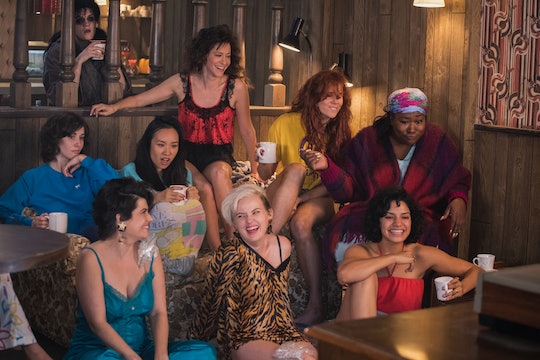 Season 2 Of 'Glow' Will Be Here Before You Know It

If it seems like almost a year ago that the women wrestlers pulled on their leotards and smeared on makeup to battle it out in the ring on Glow, that’s probably because it was. Season one premiered in June 2017, so when does Glow season two premiere? Luckily, the hit Netflix comedy will be back on June 29 with 10 more episodes to continue all of the comedy, drama, and of course wrestling with these rising stars within the show. Seriously, the new season seems to include so much in terms of where all of the female wrestlers are going and it’s amazing.

In the trailer for Glow season two, the women are starting to gain some fans and notoriety for their roles on the wrestling show, even if some of them still aren’t ecstatic about the offensive and stereotypical gimmicks that have gotten them to where they are. But, because the show within the show is so new and was struggling from the start, there is the danger of a cancellation, seemingly made even more possible when Ruth (Alison Brie) spurns the advances of a network executive. It’s all too current and all too real and something tells me that the women will grow closer because of it and hopefully fight had to keep Glow on the air as their stars continue to rise.

Throughout the course of season one, viewers got to see a little bit of each of the main wrestlers and what drove them to seek their positions within the wrestling show. We have Ruth and Debbie’s friendship, that may or may not be salvageable, Carmen, whose father was a wrestler but isn't in favor of her following the same path, and Justine, Sam’s surprise daughter, just to name a few of the notable characters we’ve come to know and love. I fully expect season two to continue to follow their respective stories.

Marc Maron (Sam) told Deadline that despite all of Sam’s flaws — and there are a lot — and all of his misconceptions about what’s right and acceptable in terms of his actions, he’s here to show up for these women at a time when they need it the most. And even though Sam is kind of icky at times, you kind of have to love him and the way the character has continued to grow and develop.

"It’s interesting because his reaction to what’s happened is fundamentally male, and fundamentally driven by a certain amount of emotional bravado, but also protectionism," Maron said of his character’s response to the unfairness the women on the show face, along with the sexual harassment from males in more powerful positions. "He felt protective, and he felt personally offended because of his own problems with power. Also, he had emotional sort of heart issues with the situation. I mean, it’s complicated in that way."

Maron also revealed that for season two, viewers will get to see how Sam handles fatherhood being thrust into his lap, as we saw at the end of season one when it was revealed that one of the Glow wrestlers is actually his teenage daughter. "The fact that he all of a sudden tries to accept the responsibility of being a father in his 40's with a stranger, it’s sort of interesting," he said. "Finding that part of Sam’s character, just locking into that, was exciting and new for me."

Besides watching the Glow wrestlers continue to train and remain part of an increasingly successful TV show, fans are likely to see more of the uneven treatment between genders in show business which honestly couldn't come at a better time. If Glow wasn't already about a bunch of strong and capable women before, it’s definitely inspiring now.