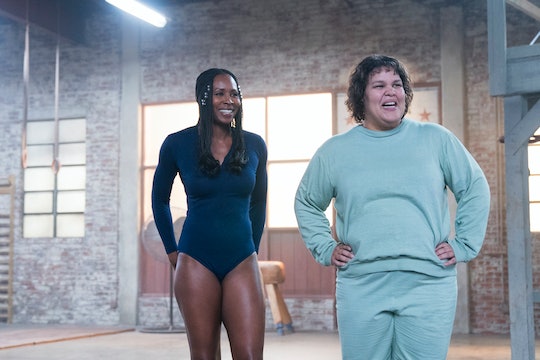 It's Never Too Soon To Get Excited For 'Glow' Season 3

Season 2 of Glow might still be brand new, but that doesn't mean it’s too soon to start asking about when Glow Season 3 premieres. The short answer is that, when it comes down to it, no one really knows, since the show hasn't officially been renewed for a third season just yet. But in the likely event that Glow is renewed, Season 3 will likely premiere at the end of June 2019. More specifically, probably on either June 21 or 28, since both of the show’s other seasons premiered on the last, or second to last Fridays of the month.

In most cases, Netflix tends to stick with fairly predictable premiere dates, so Season 3 of Glow would probably still premiere in June of next year if the show is once again renewed. Since Glow is loosely based on the real life Gorgeous Ladies of Wrestling, who performed for several years in the late '80s and early '90s, the writers of the show have plenty of material for further seasons of the show.

And given the immense talent of the cast overall, I personally hope they'll be given the chance to continue to tell their characters' stories well beyond Season 2.

Jennifer Euston, the casting director of Glow, spoke to The Hollywood Reporter about casting the many different characters for the show. She explained that since the actors had to prove themselves athletic as well, great care was obviously taken in finding the right people to fill the roles. "There was a unique aspect of casting Glow," Euston said. "The physicality the actresses would need to display in my tiny audition room, on tape, to make sure they would be able to fill the wrestling portion these roles would require. Our stunt department advised me they would need to see something — a somersault or a high kick or a split — so they could assess the actress' agility and strength." It's clear by now that the women cast to play the different wrestling roles can act as well as they can jump off the top rope in a wrestling ring.

Apparently, the plan might have always been to make the show last as long as possible. Shortly before the premiere of the inaugural season in 2017, creator Liz Flahive spoke about her vision for the show at Austin’s ATX Television Festival. "The first season we really take our time. We’re starting at the audition and we’re going very slowly to when they get to find their characters, to how they get to the actual making of the pilot of Glow," she said at the time. "We’re not quite at the moment where they are living their wrestling characters 24 hours a day. We’re definitely starting to deal with the inner play of their selves and their wrestling personas and how those start to interact." So a third season has at least been planned for by the show's creators. And when it does, it would premiere on Netflix around the same time as both of the seasons before it.

While she didn’t outright say that the plan is to hope that Netflix continues to renew the series each season, the fact that Flahive made it a point to mention the slow movement in the first season does indicate that she envisions a long future for this story rather than a rushed plot. As long as fans continue to respond to the show and enjoy each season as much as the last, it’s entirely possible that we’ll get to see a Season 3 premiere date in June 2019.