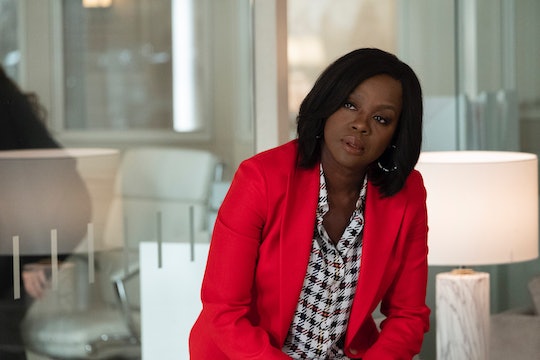 Here are some of the questions I have regarding How To Get Away With Murder right now: Will the Keating Four ever go to prison for their many crimes? Did Laurel's brother kill Nate Sr.? Can Cicely Tyson please be a series regular? And finally, when does HTGAWM Season 6 premiere? I don't have answers to any of these questions right now. But there are some clues that can help me make some educated guesses.

First of all, fans need not worry about being left on the metaphorical cliff forevermore. HTGAWM creator Peter Nowalk told The Hollywood Reporter last year that he has a backup plan if the show ended on a cliff and then was suddenly cancelled. "I don’t want to end on a mystery. I’d want there to be answers," he said. "I guess we’d have to make a movie or something. I’d do it on my iPhone if I had to." I, for one, appreciate that level of commitment. As a viewer, there is nothing worse than watching a series finale that leaves you with more questions than answers. It makes you wonder why you wasted so many hours of your time each year watching characters' journeys.

An important note: Shonda Rhimes is moving to Netflix, and HTGAWM is a Shondaland show. But despite executive producing all three of the shows that were part of ABC's original "TGIT" lineup (which also includes Grey's Anatomy, and featured Scandal until the series finale last year) she never served as showrunner on HTGAWM.

That title has always been Nowalk's, and he signed a three-year deal with ABC Studios last year. Honestly? This makes the show a safe bet, even though the ratings are hitting series lows.

A safe bet is never a sure thing in the TV industry, and though I'm not sure how long HTGAWM's formula of keeping viewers in suspense with flashbacks and flashforwards can last, I sure hope we get to watch Viola Davis and Tyson act together many more times, because it's pure magic, and Davis agrees.

This year, Davis reflected on the first scenes she filmed with Tyson in an essay for Vanity Fair. "Those first scenes we filmed together were more poignant than I could have imagined," she said. "There I was sitting on the floor like a little girl again, no wig, no makeup, and there was the then-91-year-old Ms. Tyson behind me, all grace and grit, her strong hands parting my hair and scratching my scalp the way hundreds of thousands of black mothers have done for their daughters; the way mine did for me."

Many viewers watch HTGAWM for the edge-of-your-seat suspense. But, intimate moments like this matter just as much because of the authenticity they bring to representation on TV.

It's hard to tell what's going to come next on How To Get Away With Murder since, after all, unpredictable twists are kind of what this show is known for. But at least it looks like fans are going to get some kind of answers — and likely just as many questions along with them.