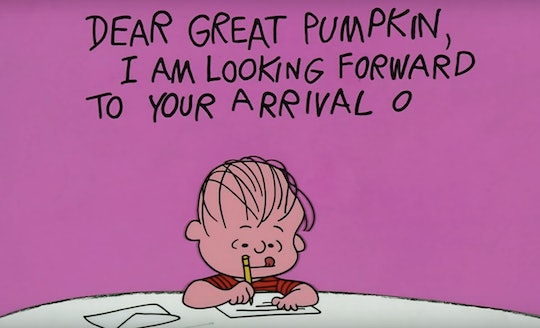 Good Grief! 'It's A Great Pumpkin, Charlie Brown' Is Coming Back To TV

It's that time of the year again! The leaves are changing, the costumes are hanging, and candy is on sale in bulk — so yes, I'm talking about Halloween. And with Halloween comes a few very fun holiday specials on television, including It's the Great Pumpkin, Charlie Brown. If your family is anything like mine, it's a fun little tradition to to gather around the TV and watch the movie every year. That being said, you might be wondering: When does It's the Great Pumpkin, Charlie Brown air? It's no surprise that the Charlie Brown classic is making yet another return to TV this year.

It's the Great Pumpkin, Charlie Brown will air on Oct. 22 at 8pm/7c on ABC, according to Cheat Sheet. It will also air again on Oct. 27 at 7pm/6c. The special is also available to stream on YouTube, Amazon, and iTunes — but you'll have to pay for it.

For those who aren't familiar, The Great Pumpkin is an animated film that debuted in 1966, and follows the Peanuts characters through a fall-themed adventure. In the movie, Charlie Brown anxiously awaits the arrival of the "Great Pumpkin," the folklorish oversized squash that his friends believe bring toys and other goods to children on the evening before Halloween (it is a similar concept to Santa Claus, though of course, set in a different time of year).

Though the film premiered many decades ago, it's still considered a seasonal classic, and many are sure to watch it each time autumn comes around.

Lee Mendelson, the show's creator, told SFGate that its success "blew our minds," referring to his and animator Charles Schultz' response to the Peanut franchise's success, but particularly this film. "[Animator] Bill Melendez did very beautiful watercolors emphasizing the fall season," Mendelson said. "The fact that he had Snoopy finally climbing the doghouse as an airplane, the jokes about dropping rocks in poor Charlie Brown's trick-or-treat bag, and Vince Guaraldi's music of course — I think all those are why 'The Great Pumpkin' gets the same high rating as the Christmas show every year."

Jean Schulz, the illustrator's wife, also commented on the show's success, commending her late husband for his timeless work. "The pictures are fun to look at, even when they're moving across the screen," she said. "They're appealing, they're funny. [It's that] it's a simple story, but it's also the beauty of the actual drawings."

With a show that has been a beloved classic for so long naturally comes a lot of history, and, in turn, many fun facts that fans may not know.

The Washington Post reported, for example, that fans of the show sent candy to Schulz' studio for years, out of sympathy that Charlie Brown never gets the candy he wanted. Or, in the same report, they reported that Mendelson also said that his late partner loved the Great Pumpkin most, despite it sometimes falling into the shadow of the Peanuts' successes with Christmas specials.

“Sparky liked the Christmas show, but he really liked ‘The Great Pumpkin,’ “ Mendelson told Comic Riffs. “It was the culmination of better animation and adapting the comic in the best possible way.” (Schulz, Melendez and Mendelson all received Emmy nominations for ”Great Pumpkin,” including Outstanding Children’s Program.)

Be all of this as it is, it just goes to show that when it comes to fan favorites, some things are just absolutely timeless. Whether you're re-watching a favorite flick from childhood, or introducing your own kids to the magic that is Charlie Brown anything, it is exciting that networks are still airing The Great Pumpkin after all these years.

It's just a few more weeks until the evening of Tuesday, Oct. 22, when the special will be on at 8pm/7c. Until then, keep collecting your candy.

This article was originally published on Oct. 9, 2018