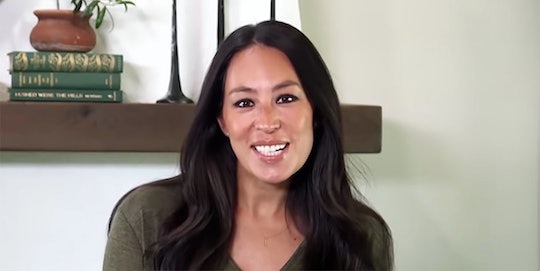 Here's When Joanna Gaines’ New Show, 'Fixer Upper: Behind The Design’ Comes Out

Just months before the news broke that Fixer Upper would end after five seasons, Joanna and Chip Gaines announced in March 2017 that a spin-off show was in the works. The series, titled Fixer Upper: Behind The Design, will take a closer look at Joanna's design ideas and her decision-making process behind each home renovation, according to HGTV. And needless to say, fans are eager to know when Joanna Gaines' Behind The Design will come out. The good news is Joanna's loyal supporters will get to see her in action sooner than later.

After years spent winning over the hearts of HGTV's viewership, Joanna and Chip revealed their plans to move on from Fixer Upper. “It is with both sadness and expectation that we share the news that season 5 of Fixer Upper will be our last," the couple shared in a portion of their September 2017 statement, according to Entertainment Weekly. "While we are confident that this is the right choice for us, it has for sure not been an easy one to come to terms with."

Of course, Joanna and Chip's loyal fans also struggled to come to terms with the news. People were devastated, to say the least, and many wondered if they'd ever see the couple on television ever again. People were so worried, in fact, that many fans completely forgot about the spin-off show Joanna hinted at on March 22, 2017.

In the Instagram announcement, Joanna said of the show's premise, according to Country Living:

We get a lot of questions about the designs, and how we get from point A to point Z when it comes to these houses and projects from a design standpoint. So we have a new series coming out this year, which focuses on each project and you get more inside scoop on how we came up with a lot of the design decisions and elements we got to incorporate.

Obviously, Joanna jumped the gun a bit when she said that Behind The Design would air in 2017, because the show is not yet available on HGTV. So, when is the series' real premiere date?

Mark your calendars for April 10, 2018 at 8 p.m. Eastern Time, design aficionados, because that's the show's official release date, according to People. Yep, in a little over a month's time, you'll be able to spend extra quality time with Joanna.

Shortly after the spin-off's premiere date was revealed, Joanna opened up about her excitement in an official statement. "I can’t wait to show our fans how every piece of the design comes together before the final reveal,” Joanna said, according to MSN. “I want to nail every detail so that, when we walk away, Chip and I know we’ve given a family the one-of-a-kind home of their dreams.”

As for Chip, he supports Joanna's new endeavor 100 percent. “Jo puts her heart and soul into every fixer upper we design,” Chip also shared in the statement, according to Brit & Co. “Our hope is that these homes become a beautiful part of each family’s next chapter.”

Oh, and if you're wondering whether the show will feature a pregnant Joanna, I wouldn't count on it. The show started production shortly before or during March 2017, according to TODAY, a full seven months before Joanna got pregnant.

But don't despair, fans. Even if Joanna's bump doesn't make an appearance in the new series, there's a good chance it will still be an awesome show. Everything and anything Joanna touches turns to gold, after all.