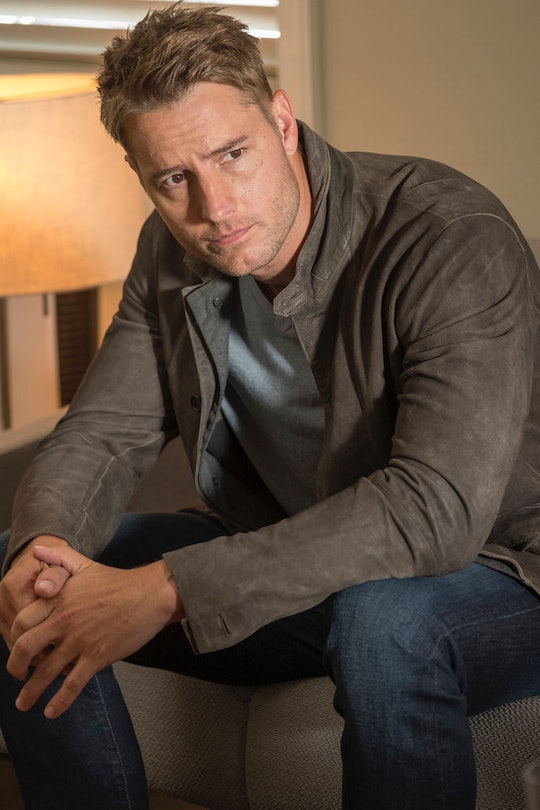 If you're still kicking around a dozen theories about what Season 3 of This Is Us will do to your tear-ducts and hearts, I'm so with you. The first two episodes of the new season raised more questions — mostly about Jack's time in Vietnam. Leave it to the (often troubled) lost soul of the Big Three, Kevin Pearson, to seek answers for the good of all. So when does Kevin go to Vietnam on This Is Us? Not soon enough is my answer, but that's just me (and a few million fans).

Milo Ventimiglia (who plays Jack Pearson) spoke to Entertainment Weekly about what may unfold saying “Kevin is on a journey of discovery. It’s a journey of discovery for both Pearson men.” Justin Hartley (who plays Kevin) felt much of the same way. “He’s going there — it’s a healing thing for him — so he’s going to get a lot of information, some stuff that he didn’t know and didn’t expect," he said. "And it’s going to jar a few things.” What's getting jarred, exactly? If this somehow circles back around to Jack's untimely death, I can't even go there.

At the end of Season 2, the final scenes with Kevin and new girlfriend, Zoe (Melanie Liburd) — Beth's cousin — showed the two on a plane traveling to Vietnam. Kevin had an old photo of Jack in service gear, along with fellow comrades — including Jack's rarely discussed younger brother Nicky, who is assumed to have died in Vietnam. So what Kevin uncovers could change everything we know about Papa Pearson. No pressure, Kev.

For a little backstory reminder, Jack and Kevin had a fragile relationship, to say the least. Kate (Chrissy Metz) was Jack's "Katie-girl," while Randall (Sterling K. Brown) strove to overcome his insecurities about being adopted by living up to Jack's "World's Greatest Dad" status. Meanwhile Kevin always felt like he disappointed his dad, eventually battling addiction and finding recovery — ironically just like Jack. And before he died Jack gave Kevin his own sobriety reminder: a medal from the Vietnam War. So you can see how Kevin's visit to Vietnam is crucial to his character development; maybe, somehow, even yours, even mine.

At a recent FYC event in Los Angelas, Hartley told TV Guide Kevin is finally being honest with himself with this trip to Vietnam. "That affects all of his relationships," he said. "These relationships that he has with people he loves so much — his family, his friends — I think they are all evolving in a different way. He's kind of turning a page. You're getting reintroduced to this character that physically looks the same but his life is completely different. It's thrilling."

In the same interview, Hartley added more about why going to Vietnam matters to Kevin so much at this point in his life. "He's trying to get more information about his dad and the life that he lived over there. I think that's going to make [Kevin] aware of who [Kevin] is, what he's made of, what he's built from. I think that's about it's about. It's a healing process, a therapy thing." And while that answer might suffice, he had to go and stir the pot saying "Then some things are going to happen and he's going to get some information that he didn't realize and it'll go from there." Assuming this is also when Nicky's story comes into play, I'll be watching with a knot in my stomach. Join me in all the nail-biting, won't you?

Showrunner, Elizabeth Berger told The Hollywood Reporter a little more about the "why" aspect in regards to Vietnam, saying Kevin's career may have had a hand. "As to how they end up in Vietnam together, obviously Kevin is in a war movie that is about to premiere and I think playing a soldier and thinking about his dad's past is going to all be stirring inside of him and may have an impact in terms of what he's thinking about and what direction his story goes in."

Makes sense. And while TIU creators, writers, show-runners, and actors know the actual details of Kevin's trip, it's fun to speculate what may (or may not) happen there. Will Nicky be alive? Will Kevin learn distressing things about Jack? Will Kevin feel invigorated or will it drive him back to the emptiness he's been fighting since childhood? Hartley said of the Vietnam revelations they're going to be "super-heartbreaking" and "shocking," and no, I'm not ready to be crushed. But I hope the next few episodes give viewers, and me, some semblance of peace. At least, until next Tuesday.