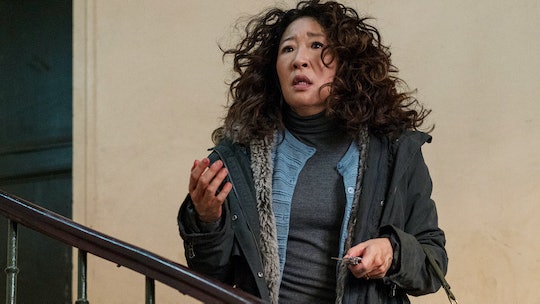 Cancel Your Plans — The 'Killing Eve' Season 2 Premiere Is Near

People may let you down, but Killing Eve never will. Early reviews for the BBC America drama are in, and it looks like Season 2 of Killing Eve has escaped the curse of the sophomore slump, and the network didn't even have to send a vial of poisoned perfume to achieve it. So when does Killing Eve Season 2 premiere? It looks like the second season of the Emmy-nominated thriller is coming back with an air date that's sooner than you might think.

Following a "stabby" Season 1 finale in May 2018, Killing Eve premiere is scheduled to air on Sunday, Apr. 7, at 8 p.m. ET, according to TV Guide. And with all of the incredible success surrounding the first season, the network decided to expand the show's viewership. So, on Apr. 7, fans of the show will get to watch Killing Eve on BBC America and AMC.

"When we launched Killing Eve on BBC America last year we had high hopes, but no idea it would become this obsession,” President of Entertainment Networks for AMC Networks, Sarah Barnett, revealed, per Deadline. "We believe we’ve just hit the tip of the iceberg in terms of potential viewers and we want to expose this brilliant series to the largest audience we can."

If you need a refresher course on what happened in Killing Eve Season 1, I don't blame you. A lot happened. Inspired by Luke Jennings' fictional thriller, Codename: Villanelle, the BBC's Killing Eve stars Golden Globe winner Sandra Oh as MI6 agent Eve Polastri, and Jodie Comer as Villanelle, an assassin. In short, Eve and Villanelle get caught up in a wild cat and mouse chase and become obsessed with each other.

In the Killing Eve Season 1 finale entitled "God, I'm Tired," Eve breaks into Villanelle's apartment and the two have it out. Eve stabs Villanelle with a retractable knife, but pulls it out immediately and tries to help the assassin from bleeding out. But, before the viewer — or Eve — could get a grasp on what went down, Villanelle disappeared.

Fans who have been waiting on the edge of their seats since the Season 1 finale will be happy to hear that Season 2 of Killing Eve will pick up right where the first season left off — 36 seconds to be exact, according to TVLine.

"Killing Eve is picking up exactly 36 heart-thumping seconds after the events of the season finale," Barnett said, per TVLine. "This new season is packed with superlative performances and is as twisty, subversive, darkly funny, nerve-wracking, and pleasurable as our fans could desire.”

According to a press release about the show's season season premiere, it's clear that there's plenty more to come in. The statement, courtesy of AMC Networks, read:

Villanelle has disappeared, and Eve is left reeling, having no idea if the woman she stabbed is alive or dead. With both of them in deep trouble, Eve has to find Villanelle before someone else does… but unfortunately, she’s not the only person looking for her.

The suspense of the Killing Eve Season 2 premiere is killing me. But, from the sounds of it, there are plenty of chilling moments that are just waiting to be unraveled. So until Apr. 7, I'll just have to wait "patiently" to see what happens next.