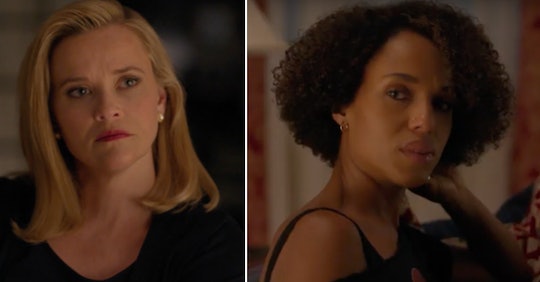 Mark your calendars because Little Fires Everywhere will premiere on Hulu on Wednesday, March 18. Though the teaser trailer released today, Dec. 13, doesn't reveal much about the eight-episode miniseries, it does include plenty of brooding looks, dramatic shots, and a little bit of fire to only hint at all of the intense moments to come. "We all have parts that scare us," Washington's character says in the teaser. "But we can't not look at who we are."

Based on Ng's 2017 bestselling and incredibly popular novel with the same name, Little Fires Everywhere follows the fates of two different families — the Richardsons and the Warrens — and how their secrets keep them intertwined. Witherspoon stars as the "picture-perfect" mom, Elena Richardson, while Washington plays the enigmatic single mother and artist, Mia Warren. The miniseries is set in the late 90s, according to E! News, and will dramatically unfold the complexities of motherhood.

Little Fires Everywhere just so happened to be Witherspoon's monthly book club pick for September 2017. "To say I love this book is an understatement," she wrote about the book at the time. "It's a deep psychological mystery about the power of motherhood, the intensity of teenage love, and the danger of perfection. It moved me to tears."

In addition to co-starring in the miniseries, both Washington and Witherspoon are co-producers on it as well, with their respective production companies, Hello Sunshine and Simpson Street. Both actresses have been very involved with the creation of the series. According to Variety, Witherspoon and her production partner first brought the book to Washington, and together they approached the series' show runner, Liz Tigelaar, to help them adapt it. Witherspoon has even handpicked songs to go in the series, according to The Hollywood Reporter.

On Friday, Witherspoon shared on Instagram that she was "SO excited to share the first look" at Little Fires Everywhere with her followers, and Washington wrote that "it’s about to get lit," sharing the teaser video as well.

March 18, 2020 is just three months away, which means you have plenty of time to pick up a copy of Little Fires Everywhere and start reading before the miniseries premieres. Or reread it again. And again.