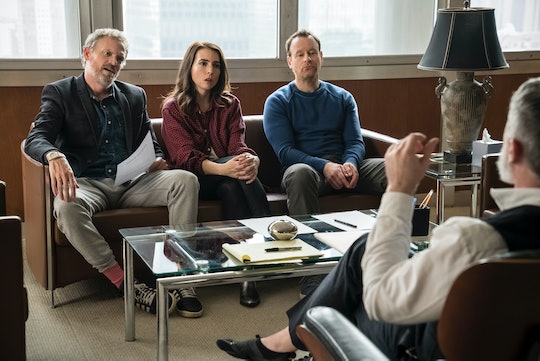 'Nobodies' Season 2 Is Still A Long Way Off

When a new series is picked up for a second season before its premiere season even begins, you just know that the network has total and utter faith in it. Such is the case with Nobodies, which was renewed for a second season a full two months before the first season ever premiered on TVLand. And now that Season 1 is coming to a close this week, fans will undoubtedly find themselves wondering: when does Nobodies Season 2 premiere?

Although a second season is a sure thing with the Melissa McCarthy and Ben Falcone-produced comedy, the official Season 2 premiere date for Nobodies has yet to be announced. But since it's slated to premiere sometime in 2018 with a 12-episode order, we can assume that it may debut sometime in March since the series premiere came in around the same time in 2017. According to Variety, Keith Cox, the president of development and production for TVLand, found it easy to renew the new show. "Picking up Nobodies for season two was a no-brainer when all these extremely talented people are behind it," Cox said. "It’s a bold, quirky, hilarious look at what happens when you will do or say anything to succeed in Hollywood."

It’s certainly helped that the first season of Nobodies, was filled with amazing guest star appearances and cameos, including McCarthy and Falcone themselves. In addition to having MADtv’s Michael McDonald serve as the showrunner, director, and executive producer, Season 1 also saw the likes of Maya Rudolph, Jason Bateman, Kristen Wiig, and Jim Rash appear on-screen. So it feels safe to assume that Nobodies Season 2 will feature more of the same kinds of stars.

McCarthy might be one of the bigger names attached to the show, but after only appearing in a couple of episodes, it’s been made pretty clear that she doesn’t have to be the one to carry it. The show has managed to successfully progress even without a big name and face constantly at the forefront. Of course, it doesn’t hurt though.

At first glance, TVLand might not seem like the go-to network for your current comedic needs, but in recent years it’s seen an influx in producing highly addictive shows like Hot in Cleveland, Younger, and Teachers. So it's nice to see Nobodies added into the fold of success stories.

Though the exact premiere date of Nobodies Season 2 remains a question mark, it's at least comforting to know that the new series will be back eventually, so that the hilarity can continue.