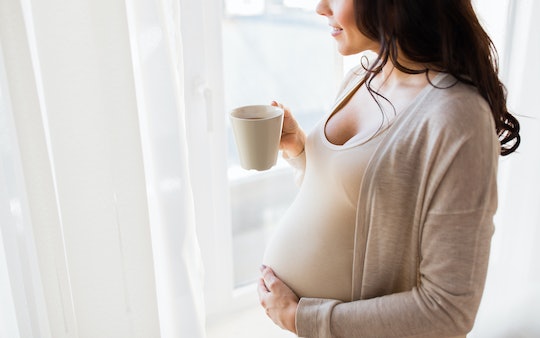 Everything You Need To Know About 'Pregnancy Brain,' According To An OB-GYN

When I worked in a law firm’s marketing department, I was surrounded by pregnant women in my cubicle bay. As the department’s copy editor, I was used to being asked grammar and spelling questions, but I noticed a surge in the questions from my co-workers once they announced they were pregnant, and they all blamed it on the dreaded “pregnancy brain.” So when does pregnancy brain start, exactly? It may be good information to know, even if you aren’t expecting, so you can cut the loved one in your life a break if they misplace their sunglasses on top of their head. If you are expecting, while frustrating, just know that pregnancy brain won't last forever (even if it feels like it).

Though the term pregnancy brain obviously has the word “brain” in it, ironically enough, it’s not from any structural changes in your brain, according to studies. Dr. Yvonne Bohn, OB-GYN at Providence Saint John’s Health Center in Santa Monica, California, tells Romper it’s the dramatic change in hormone levels. “Estrogen and progesterone levels rise rapidly, causing multiple physiologic symptoms ranging from nausea, fatigue, and insomnia. Sleep deprivation and fatigue can lead to forgetfulness and cognition issues, possibly leading to the infamous ‘pregnancy brain,’” she says. Insomnia and fatigue definitely contribute to cognition issues — have you ever had a fitful night’s sleep and couldn't seem to function the next day?

Pregnancy brain can occur as early as the first trimester since that’s when your hormone changes are the most dramatic, Bohn says. Usually the hormone changes plateau during the second trimester, but as delivery approaches, you may be experiencing insomnia again because of the ever-so-lovely pregnancy symptoms of having to pee a million times throughout the night, being uncomfortable from your bump, having heartburn, or having leg cramps. “Anything that can cause interrupted sleep can impact cognition and memory,” Bohn says. Thus, causing “pregnancy brain.”

Pregnancy brain is the pits, no doubt. Thanks to hormones, it occurs pretty early on in pregnancy, but luckily, there is a break during your second trimester. Now, once the baby is born, is there such a thing as “postpartum brain” from lack of sleep? (Actually, I think it's just called motherhood.)