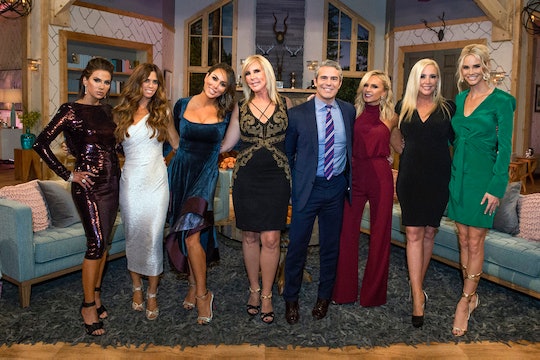 Should Fans Be Worried About The Fate Of 'RHOC'?

As soon as one season of Real Housewives comes to a close, people immediately want to know when it's going to be back, what's going on in the women's lives, and if any of the women have quit (or been fired). So now, Bravo Nation is wondering when does RHOC return for Season 13? The series has not been officially renewed, but if I were you, I wouldn't worry about it. As the original edition of the extremely popular Real Housewives series, The Real Housewives of Orange County holds a special place in the hearts of Housewives fans worldwide. At least it does in the heart of this Housewives fan. And as long as it remains so, it's likely the show will return.

Season 12 of original Housewives show was an emotional whirlwind filled with dramatic public throw-downs, occasional bladder leakage, and lots of medical procedures. The self-proclaimed "OG of the OC" Vicki Gunvalson started the season still on the outs with most of the ladies, but made itty bitty tentative little baby steps towards reconciliation, particularly with Tamra Judge. Shannon Beador, however, remained steadfast in her distrust of Vicki, particularly in the midst of a life crisis. Heather "Fancy Pants" Dubrow was not present for Season 12, but her absence was sublimated with the return of devout Christian and glitter-enthusiast Lydia McLaughlin. The show also introduced new 'Wife, Peggy Sulahian who brought with her an aloof attitude and a love of diamonds and flashy cars.

Because there is no information available yet, I really cannot say with any degree of certainty when the next season will air. But if I were a betting woman, I would say that the next season will premiere sometime in the summer of 2018. The past few seasons have aired in June or July, for a summer of California drama. If the show continues this trend, that would mean that we'll get back to the women in just a few short months. It also means that filming for the next season should begin relatively soon, and so more information may soon be available.

The lack of concrete facts about the following season has by no means slowed down the rumors about who will be leaving the cast and who will be staying. I, of course, have my own unsubstantiated opinions. One rumor swirling about has been that Sulahian will not be returning for another season of the show. If I'm honest, it doesn't seem like she's enjoying herself that much and she doesn't seem to have formed a strong bond with the other women, particularly after the Iceland debacle. Some sources even say that the other ladies can't stand her and are mounting a smear campaign against her to get her booted from the cast, according to RadarOnline. This seems extremely dramatic, if true.

Other rumors speculate that Shannon will not return following her divorce from her husband David Beador, which has so far been extremely public and is clearly incredibly painful. When asked whether she would ever consider returning to the franchise, Dubrow gave a noncommittal "never say never," which is both maddeningly vague and distantly hopeful. Honestly, if Dubrow came back and Sulahian left, I would not be the least bit upset with that arrangement.

So no, I cannot say for certain when the next season of the show will premiere, or even for certain that there will be a next season. That being said, I fully expect to see the women of Orange County back on my television screen this coming summer.