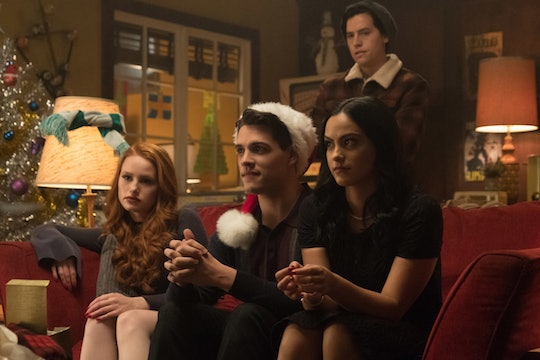 The 'Riverdale' Fall Finale Is Sure To Be Intense

It seems like just yesterday, we were all scrambling to figure out who killed Jason Blossom, but now here we are, watching all of Riverdale's tragic characters go through the kind of turmoil and stress that would destroy anyone else. And with the fall finale airing this Wednesday night, things are about to get even more intense. But when does Riverdale return from its winter hiatus?

The Season 2 fall finale is sure to leave things on a cliffhanger and give fans another big mystery to solve. Hopefully, it will also mean making some progress on uncovering the Black Hood's identity, while also trying to figure out what's going to happen with Bughead (that's Betty and Jughead, for those unfamiliar with the lingo), or Varchie (Veronica and Archie). Neither couple seems to be doing very well at the moment.

According to TVLine, Riverdale will return from its winter break on Jan. 17, which isn't as bad as it could have been, as some shows have already left TV for a much longer winter hiatus. I mean, to be fair, there's nothing like several long weeks to contemplate the future of Riverdale. It allows one to mull over all of the theories about the Black Hood and Betty's estranged brother, who could very well make an appearance before the fall finale is over. (I haven't given up hope yet!)

Last season, Riverdale premiered as a new series in January with a much shorter season, meaning fans haven't had to deal with any big hiatuses for this show before. Season 2's extended season has managed to live up to all of the hype, though, and there have already been several game-changing episodes that could have served as amazing fall finales. So whatever is in store this week has got to be pretty epic.

Lili Reinhart (Betty) even tweeted about Riverdale's fall finale recently and teased about what's coming next for Betty and from the sound of things, it doesn't look like it's going to be good news.

TVGuide’s description of the Riverdale fall finale mentions pretty much all of the core cast, but also adds in this tidbit that could finally give fans some closure on the big mystery of the season: "Betty and Archie's vow to take down the Black Hood once and for all leads to a dangerous showdown." Knowing that Archie and Betty are teamed up, as opposed to either of them paired with their respective significant others proves that relationships are going to have to take the backseat for the fall finale.

Riverdale creator Roberto Aguirre-Sacasa spoke to TVGuide about what fans can expect from Riverdale’s midseason finale. According to Aguirre-Sacasa, Betty and Archie will be "in way over their heads" as they try to track down and unveil the Black Hood once and for all. There’s also still Penny Peabody to consider, who doesn’t seem to be going anywhere. "[Jughead is] incredibly desperate," he told the outlet. "From the end of the finale last year, FP said to Archie, 'You've got to take care of my son. There's darkness within him. He'll be drawn to the dark.' That's been a big story for him that we've been telling all through this season. It's sort of starting to crystalize around Penny and FP."

While it would seem that FP’s re-entry into the Serpents earned Jughead a get out of the gang free card, he still has a debt to repay with Penny, so even if the mystery of the Black Hood is finally solved in the Season 2 fall finale, there are plenty of subplots to come to the forefront once Riverdale returns in January.