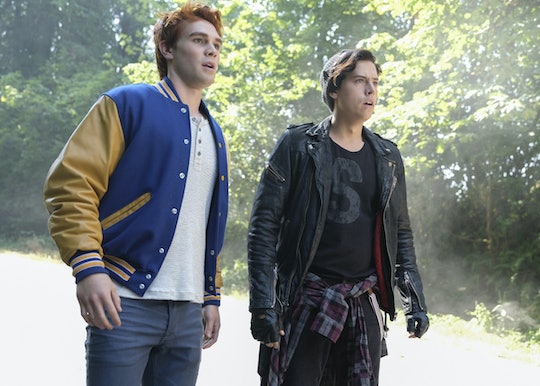 Although I have no doubt that the big reveal of the Black Hood is going to come much later in the season, or, at the very least, during a mid-season finale, there’s also no time like the present to start sifting through the clues about the Black Hood on Riverdale. Already, there are a few different identifying factors to go on and as the mysterious hooded killer continues to contact Betty, there’s sure to be even more revealed as the season moves forward.

My best guess is that, gradually, the clues about the Black Hood will all start to come together as the walls slowly close in on him — though whether or not this person turns out to be one of the main characters has yet to be seen. I think we can safely rule out the likes of Betty, Archie, Veronica, and Jughead, but in my eyes everyone else is basically fair game. As it stands, each episode of Season 2 so far has brought a little something more to the table regarding his true identity, so the clues will likely be coming until the big reveal later this season. And right now, there are enough clues to really start narrowing down that suspect list. Such as...

It’s Most Likely A Man

Archie (and viewers) could tell right away that the Black Hood appeared to be a man and during the phone calls with Betty, the Black Hood sure sounded masculine, even if his voice was distorted.

He Has Green Eyes

From day one, Archie’s main identifying factor about the Black Hood has been his green eyes. Not only that, but viewers actually saw the green eyes through the hood during the robbery at Pop’s.

He Knows Details About The Residents Of Riverdale

During those phone calls and in the letters the Black Hood has sent to both the Riverdale Register and to Betty, he’s made it clear that he knows a lot about the residents of Riverdale, including the romantic relationships and crimes of individual people.

He's Been Watching From The Beginning

The Black Hood told Betty that during her speech at the 75th Anniversary Jubilee, he was there watching and listening and that her words about making Riverdale safe are what inspired him to start his killing spree. So if that’s the case, he’s been in the shadows (or hiding in plain sight) for a while.

In the episode "Chapter Eighteen: When a Stranger Calls," the Black Hood instructed Betty to meet him at an abandoned house, where he said she would find out who the Black Hood is. It could have just been a random house, or it might have been another clue that will eventually lead Betty to the Black Hood’s identity.

At different points, both Archie and Toni have said that the killer is likely in is 30’s or 40’s and while that doesn't necessarily narrow things down too much, it still gives viewers something to keep an eye out for.

He Has A Connection To Betty

Even before he admitted that Betty was his killing inspiration, he’s never come close to hurting her, but instead those around her. And now that we know he doesn't want to "share" her with anyone else, it's fairly obvious that the Black Hood has a strong connection to Betty.

If the reveal of Jason’s killer in the first season was any indication of the shock value that will come once the Black Hood is revealed during Season 2, then it will definitely be worth the wait.