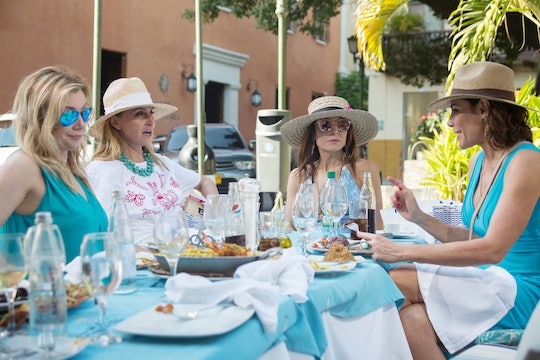 'RHONY' Season 11 Has Some Major Changes In Store

The credits haven’t yet rolled on the Season 10 reunions, but there’s no time like the present to wonder about the future of The Real Housewives of New York City. Or, more importantly, when Season 11 of RHONY premieres. Although an exact premiere date hasn't yet been announced, my best guess would be that the show will return in April 2019. The past few seasons of RHONY have all premiered in the month of April and concluded in September. So if the show stays in the same general schedule and time frame, then fans are looking at an April premiere date, come Season 11.

But before that happens, there could be some big changes to the show. Although Bethenny Frankel has been part of the main cast from Seasons 1 to 3 and then again from Seasons 7 to 10, she might not return next season. According to Us Weekly, an alleged insider said that Bethenny has yet to sign a contract to continue on as part of the RHONY cast. "Bethenny’s contract is much more complex than the other Housewives' contracts," the source said. "She's usually late to the game when it comes to signing on but she doesn’t hold up production and she usually confirms just in time."

Us Weekly also reported that filming for RHONY typically begins around Labor Day, so if Bethenny really hasn't signed her contract yet, she’s cutting it pretty close.

Bethenny also recently lost her sometimes boyfriend and friend of more than 30 years, Dennis Shields, when he was found dead in his apartment in New York City. Although the RHONY star hasn't spoken out about the loss very much, she might want to take time off the show to regroup and mourn the loss privately. So even if she doesn't sign her contract for Season 11, there’s always a chance she could return to the show later on.

But Bethenny isn't the only familiar face that fans may not see next season. Carole Radziwill, who’s been on RHONY since Season 5, will not be returning for Season 11 of RHONY. In a statement to The Daily Dish, Carole said that she’s leaving the show to focus on journalism and producing. As fans know, long before she was a Housewife, she was a published author and journalist, so it may not be a huge surprise for some fans.

"My original curiosity about reality television has waned over the years and I am focusing on TV and writing projects that better suit my more steady temperament," she said in the statement. "I have worked with amazing producers, made great friends, and I’m thrilled to leave frenemies behind. I will remember this entire experience with delight, humor, and a veracious accuracy. Next."

While it's not clear yet if Bethenny will return to the show or not, Carole’s spot will need to be filled before filming begins. Just in case you think Jill Zarin might slide into the open position, though, she will not be returning to RHONY as a main cast member anytime soon. She told People that, if anything, she’d return to the show as an official "friend."

So there’s really no telling who, if anyone, will replace Carole and who could take Bethenny’s spot if she doesn't return. Us Weekly recently announced that Denise Richards will be joining the cast of RHOBH, so maybe RHONY can get on the celebrity train and possibly replace Carole with a well known actress come Season 11.

Unfortunately, there’s no set date for the RHONY Season 11 premiere, but if history repeats itself, then viewers will be watching the women square off again by April.