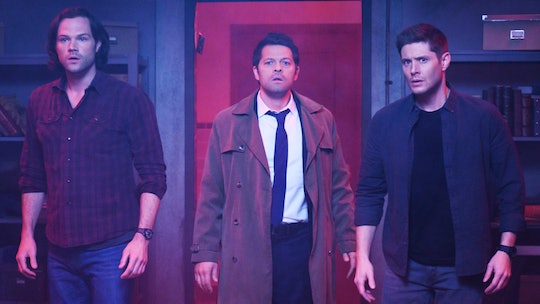 The Wait For The 'Supernatural' Season 15 Premiere Begins Right Now

They say all good things must come to an end. I just didn't think that Supernatural would ever be one of them. As the Season 14 finale draws nearer, so does the series finale of The CW hit. But much like the premiere of Game of Thrones' final season, Supernatural fans are now highly anticipating the last start date to the show that has been on air for 14 years. So when does Season 15 of Supernatural premiere? It's going to be a while before anything is released.

Per Deadline, The CW confirmed that Supernatural would be renewed for Season 15 back in Jan. But since the 14th Season hasn't come to an end just yet, the Supernatural Season 15 premiere date hasn't been released and fans will just have to hold on a little longer. That being said, The CW announced their Fall 2018 schedule in June, so it's likely that fans will know the air date for Season 15 around then.

If you just can't wait, then you can probably make an educated guess when the Season 15 start date will be based on previous seasons. The 14th Season began airing on Oct 11, 2018, and Season 13 premiered its first episode on Oct. 12, 2017. In fact, the past seven seasons have all started in the first two weeks of Oct. So if I had to guess, the 15th Season of Supernatural will likely begin on either Oct. 3 or 17. But things could change, especially now that it's the last season.

The news of Supernatural's cancellation following the 15th Season may come as a bit of a shock to fans. When the series was renewed early on, The CW president, Mark Pedowitz, revealed that the show was still going strong. As in, strong enough to continue past 15 seasons so long as the show continued to fit certain criteria.

"As long as the ratings hold up and the guys (stars Jared Padalecki and Jensen Ackles) want to do it, it's really that simple," Pedowitz said, according to Deadline. "They have created something about these two brothers that actually transcends."

Nonetheless, on Mar. 22, Jensen Ackles, Jared Padalecki, and Misha Collins posted a video on Twitter to announce the end of the series.

“We just told the crew that though we’re very, very excited about moving into our 15th Season, it will be our last,” Ackles said in the video. “Fifteen years of a show that has certainly changed my life, and we just wanted you to hear from us that though we’re excited about next year, it will be the finale. The big, grand finale of an institution."

While fans are deeply saddened by the news, at Vegas Con, Ackles and Padalecki ensured fans that the end of Supernatural was a "community decision."

"The network and the studio did not say like, ‘Hey, guys, get outta here! You’re done,'” Padalecki revealed, via TVLine.

Ackles also added that the decision wasn't easy and the team had been talking about it for a long time.

But ultimately, everyone wanted to end the show on their own terms. "I think that it was everyone wanting to do the biggest service to the show that we could by going out strong," Ackles said. "So it was just taking that leap of faith of going like, ‘Well, guys, let’s get out the paint and paint that finish line, and hold our heads high, because what we’ve accomplished is unlike any other.’"

Although the Season 15 premiere is currently unconfirmed, the Supernatural family can bet on a fantastic final run. And who knows? Maybe Supernatural will finally get a spin-off series. Wayward Sisters, anyone?