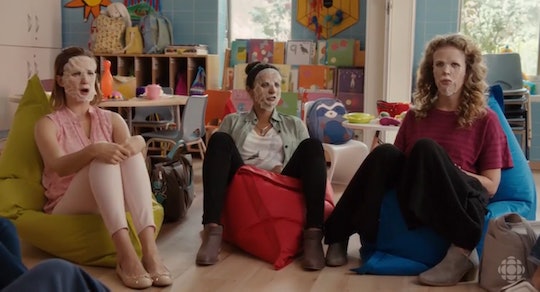 Already Finished 'Workin' Moms' Season 2? More Is On The Way

Canada has been watching the hilarity that is Workin' Moms since it premiered on CBC in 2017. But global audiences were officially introduced to the show in 2019 when Season 1 was released on Netflix. Season 2 was released to the platform on July 25. But fans know more episodes exist and want to know when Workin' Moms Season 3 comes to Netflix.

I wish I had an exact date to report, but the best I can do for you is guess. Season 2 of the show came to Netflix six months after Season 1. If Netflix follows the same release schedule, that means that Season 3 would arrive in January 2020. It's a long wait for sure, but not unendurable. There are two seasons to marathon as much as you want while you wait.

Workin' Moms is a hit among parents because the sitcom delivers laughs while not shying away from difficult issues moms sometimes face, like Postpartum Depression (PPD). Who would conceptualize a show that gives moms more authentic versions of themselves on the small screen? A fellow mother who knows the struggle, of course.

Comedian Catherine Reitman experienced PPD and struggled with her identity after the birth of her son. She explained to Forbes why she hadn't felt empowered to tell authentic motherhood stories before Workin' Moms. “Because there is less female storytelling, especially motherhood storytelling, there has been immense pressure on my storytelling to represent more people, and to do so in a sort of of unrealistic way." Obviously, times have changed. “What’s great about right now is that there are more stories being told about women, and we’re hearing both sides of it," Reitman said.

Stories based on real-life experiences are often generated by one specific moment. Reitman's "moment" is funny in hindsight and sheds light on the pressures society puts on mothers who work. "I was away from my 6-week-old child, there were all these male comedians on set and they were teasing me," Reitman told Good Morning America. "They were saying 'Oh, is the baby calling the nanny mom yet?' I started crying in front of them. They went completely silent. It was awkward and hilarious and painful all in one." Her husband Philip Sternberg who is now a star and executive producer on Workin' Moms saw the TV potential her stories had after that and encouraged her to write the show.

Of course, not every experience Reitman has had is funny. Workin' Moms has afforded her a platform to talk about her PPD, which not many moms feel safe doing. "I would be driving, fantasizing that a car would hit me and put me in the hospital. [I thought] I would be in a coma and get taken care of and not have to worry about my responsibilities," Reitman told GMA.

Workin' Moms is her gift to other mothers who can relate to her experiences. "It represents the battle cry that so many mothers feel whether they're stay at home moms or working—it's a battle to get to be seen as the person we were before we gave birth," she says.

You have partners in this journey through motherhood. If they're not in your life right now, they are on screen in Kate, Anne, Frankie and Jenny.