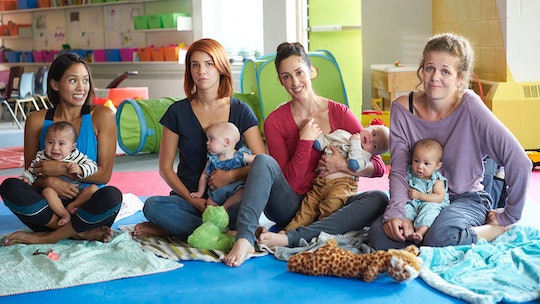 In the opening scene of Netflix's Workin' Moms, Frankie Coyne (played by Juno Rinaldi) confesses to her baby group that she may have a "touch" of postpartum depression (PPD). "I was driving this morning, and I fantasized that a car would just hit me," she says casually, imitating the noise of a violent crash, "Take me away from all this. Not kill me! I’m not suicidal. Just leave me braindead for like a week. Ten days, actually."

For Frankie, the intense variations of guilt convince her that she is not "enough" in any category of her life. These emotions ultimately manifest as postpartum depression, as they do for so many mothers in the real world — approximately 10 to 20 percent of new mothers experience postpartum depression in the United States alone, while 70 to 80 percent experience some form of the "baby blues." (It is worth noting that, over at Slate, Jenny Jaffe argued that Workin' Moms perpetuates "harmful" stereotypes and confuses depression and psychosis, in a more literal reading of the show.)

Mom guilt isn't limited to those with a perinatal mood and anxiety disorder, though — a hard truth that all of the women of Workin' Moms prove. Each of them grapples with the competing pull of work and motherhood. Reitman has said that each of the main characters reflect a part of her own personality as a new mom, and most viewers will find one character resonates above all (at least, this is what I've gathered from dissecting the show with fellow moms).

Take Kate Foster (played by creator and star Catherine Reitman), for example. After taking maternity leave, Kate returns to her high-powered office job in marketing. It's a job requiring long hours and late-night meetings. It's a job she adores. In no time, Kate's up for a promotion that would involve moving to Montreal (a one-hour flight away from home) for three months. Much of her story surrounds the grueling inner battle between following her professional dreams, even if it means time away from the family, or saying goodbye to those dreams in order to be more present for her husband and baby.

Meanwhile, Anne Carlson (actress Dani Kind) learns that she is pregnant, again. Anne already has a 9-year-old daughter and a new baby. A third pregnancy wasn't part of the plan, and Anne's struggles revolve around what it means to not want to be a mother again when one is already a mother. She has to figure out a way to explain that she can love her children, and love being a mother to them, while simultaneously not wanting to do it all again. Ultimately, she has to tell her husband and fellow parent friends that she actually wants an abortion, while navigating the guilt she feels over wanting to be a mom, but not wanting to be a mom.

Then there's Jenny Matthews (Jessalyn Wanlim), one of the youngest mothers in the baby group all of the characters attend. For Jenny, motherhood seems to bring with it the feeling of trickling youth. While her husband assumes the role of stay-at-home dad so she can go back to work, Jenny begins exploring a new life at the office and after hours. She wants to flirt with boys, hook up with strangers, drink all night, and party until sunrise. She wants to rock her old tattoo chokers from college and feel young and care-free and alive. Eventually, however, she realizes her double life isn't entirely sustainable. Then comes the guilt of not doing well by her husband and kid, and of not doing well by herself. Of wanting to be a mom, but also wanting to be a 20-something woman who gets to go out. Who gets to put herself first sometimes.

As individuals, we may resonate with one character more than the rest. When it comes to the specific subject of mom guilt, however, Workin' Moms is masterful in that it finds a way to explain what often feels like an inexplicable feeling through all of the protagonists' narratives.

The truth is that the world just isn't set up to allow women that kind of feeling. If we value certain career goals, we have to make compromises at home. There's no way to give 100 percent at the office, and 100 percent at home. No one has the time or the energy for that.

When Kate asks her boss, Richard, for more information on the woman she'll be working for in Montreal, she inquires about that woman's children.

"What are her kids names again?"

"I don’t think she’s ever mentioned them," he says.

That brief moment sums it up fairly well. To reach certain professional goals, work needs to come first. As Kate has to point out on more than one occasion, this is a fairly acceptable course of action for fathers who have to travel for work, or live away from home for work — but not so much for mothers. Mothers, who are expected to always put baby first. Mothers, the caretakers of all. Mothers, who are meant to not give a damn about the dreams they had before becoming mothers.

It works the other way around as well, though. Even if a woman wants to take a step back at work and primarily focus on her children — on "just" being a mom — she is made to feel guilty for not wanting more. For not wanting to "be" more. We are taught to belittle the act of child-rearing while simultaneously being taught that it is one of our primary functions as human beings. This isn't just confusing, but agonizing. It leads to endless self-criticism.

I'd argue that the infinite incarnations of mom guilt are at the core of what makes so much of this stuff so difficult. We can never simply enjoy ourselves. We can never unplug when we're with our kids. We can never stop thinking about our kids when we're at work. Like Jenny demonstrated in Workin' Moms, we can't just party all night without facing some type of consequence — without facing the reality that the days of being totally selfish are gone. We can't just be people; individuals. There's so much more now. So much more to do, and be, and care for.

Season 1 of Workin' Moms ends optimistically, though. One by one, all of the women begin realizing that they cannot possibly be the best moms they can be unless they're also looking after themselves. That type of self-care looks differently for each of them. Some are still figuring it out. Frankie wants to start therapy. Jenny isn't sure if she wants to be married, but she has at least admitted she isn't happy. Anne has an abortion, which seems to bring her closer to the family she already has. Kate goes to Montreal.

It doesn't end up being everything she's hoped for, but at least she has tried. I don't know that there's any escaping mom guilt — not fully — but I do know that it's helpful to remind ourselves that we don't stop being people when we start being mothers.