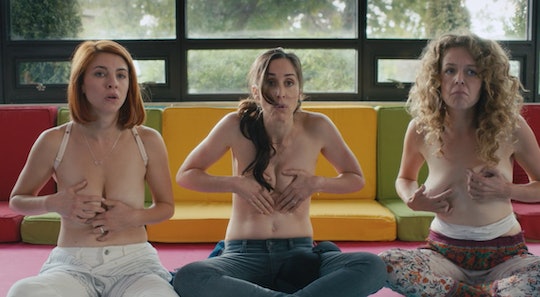 On the day she returns to work, the lead character in Working Moms, Kate (played by creator Catherine Reitman), is stalling the baby handoff as her nanny waits in her kitchen. "When you've got a bond like this," she rambles, cuddling her son, "it's hard to—" "THEY'RE GOING TO FIRE YOU, KATE," yells her husband from outside.

Since its release this month, Working Moms has been gobbled up by Netflix subscribers hungry for more TV fare in the tradition of Catastrophe, The Letdown, and Motherland. Of its peers in the sneaky-funny new-parenthood genre, it goes the deepest into workplace culture and the secret relief some parents feel at leaving their kid for eight hours to go sit in a shiny glass cube and work on some brief or pitch or whatever it is we all do for money/free coffee. Part of this devil's bargain is of course getting topless and pumping. In the early episodes especially, the verisimilitude of the characters having their boobs sucked into oblivion by pumps went through me like a nipple piercing. PUMPING. The worst.

The Working Moms pilot bursts out of the gates with a frieze of boobs — they belong to career-driven Kate, psychotherapist Anne (Dani Kind), and Frankie (Juno Rinaldi), a real estate agent who fantasizes about a death holiday, and later tries therapy. Each is evaluating the damage, post-baby, to their breasts. "Could be worse," Anne says, peering down. "No, could be better. It could be better."

They're sitting in a mother's group as an alarmed group leader watches on, begging them to put the boobs away.

The mothers on the show do not have to feel grateful about whaling on their boobs every three hours in a repurposed meeting room.

From there, we are off to Kate's office, where her boss gives her a warm welcome: "HR tells me you have a room to do your milking... thing," he says, checking off the "employee can't sue us" box. Her private office has clear-glass walls, so she goes to the bathroom to pump. She subsequently spills breastmilk onto herself and onto her brief, and arrives late to a crucial client meeting. Elsewhere, Frankie is pumping in her car outside an open house as a creepy guy watches on, and Jenny (Jessalyn Wanlim) is caught wacking off while pumping in her designated lactation space.

What's brilliant about these disparate scenes of breastpump cringe is that the men are doing the right thing by HR, lactation rooms are being provided, the need to empty boobs is being formally respected, but the women are allowed to feel like this isn't really something they asked for.

It's nice that workplace protections exist, and it's great that someone came up with a mechanical way for mothers to keep feeding their babies while disappearing for nine or 10 hours a day, but the mothers on the show do not have to feel grateful about whaling on their boobs every three hours in a repurposed meeting room. It's an imperfect solution to a tricky problem. No one has to love it.

I have never gotten off while pumping (and no judgement to Jenny for giving it a whirl!) but the scene of an intern walking in on a hands-free pumping bra-rig screeching away and Jenny driving 80 miles per hour down the self-love highway was brilliant because the intern's reaction — like he has stumbled on a secret cave of horrors — is not that different from my reaction watching it as a mother-of-two who pumped at work to at least six months each time. Pumping is a dirty magic trick executed in defiance of our bodies' chemistry: to get the milk to come on out, I had to: a) drink seltzer water while pumping, b) look at photos of my babies on my phone to spritz myself in oxytocin and help the letdown, and c) try to forget that outside the door that concealed my boobs/nipples/spray was a row of accountants unaware that bodily fluids were aloft just four feet away.

As I tried to claw back some of the ground I had lost while being out on maternity leave (my boss informed me on my due date that the promotion had gone to someone external), it was tempting to just skip the pumping sessions and attend that meeting or go the extra mile at my desk. I tried to send emails while shut into the empty middle-manager's office, with all its copies of Productivity & Management, but as most people who have pumped know, it works best as a hands-on task. The more you can massage and squeeze, the more milk comes out — having it all is truly impossible when you only have two hands.

At the end of the first episode, when Kate settles down into her nursing chair with her baby after a long day at work and has trouble latching him, we see something entirely real — the baby in that scene is her actual baby, she told Romper in a visit to the Bustle offices. As he cries and she tries desperately to jam her nipple into the roof of his mouth, it is clear how impossible it is to ever go back to the time before. In leaving your baby and returning to work, there is a degree of freedom, of possibility, but there is also the challenge of fitting back together with the life you left behind.