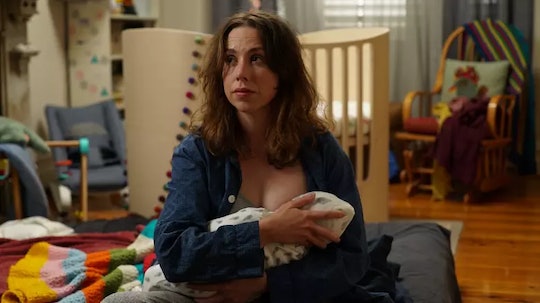 Watching Audrey deal with new motherhood in Netflix's surprise hit The Letdown, starring Alison Bell, who also co-wrote the series, you get a bit of a thrill. In a mum's group full of stock parenting types — the crunchy Moon Juice-type mom, the type-A mom who FaceTimes into the meeting, the WASPy blonde who seems born for motherhood (#blessed), the completely unfazed SAHM, the single mom who used a donor — Audrey feels out of place, just totally bloody thrown by having a newborn and without a neat stereotype to fall back on. Thank god, you might say in your house, secretly happy that someone else is failing, too. There are a lot of ways to deal with the postpartum adjustment, and Audrey proves that cracking endless jokes about it is a valid approach — what else would you expect from an Australian show?

"Culturally, that's just what we do. We joke all the time. 'Nothing wrong here! Let's just laugh,'" Bell tells Romper by phone from Los Angeles. "That's our default setting, make a joke."

The series is very, very funny — when a fellow mum asks Audrey how things are going with the in-laws in town to "help," she replies, "Well the house is immaculate," without missing a beat. Of course she's sitting in a pub drinking a beer at 9 a.m. (Bell says the day-drinking wasn't autobiographical: "We were thinking of when your in-laws or someone are annoying you — not that I have annoying in-laws!") Audrey drives her baby around at night to get her to sleep, pleading with a drug dealer who wants her off his corner that she'll buy some product ("Have you got, I don't know, coke? I remember that." "Four hunji." "Jesus Chr—! When did that happen?") Later, Audrey confesses that whenever she doesn't know what is wrong with her baby, she blames the endless crying on "teething."

I was just appalled that I hadn't seen what she was going through on screen.

But as the show moves through its first season, you realize that all the women in the mother's group ("parent's group," corrects the one dad there) have their challenges — marriages are in upheaval, there is incontinence, grandparents want to baptize the baby (um this is Australia), sex is on pause. A camaraderie develops.

In Australia, as Bell explains, when you have a baby, the local council sets you up with a maternal health nurse and a bunch of parents who have also just given birth. "You're thrown together with a group of people with whom you have nothing in common except that you've had a baby," says Bell. "It has the potential for great ~eclecticism~," which is a polite way of saying "wow, other parents."

Primary carers get four months of paid leave at minimum wage in Australia, if not additional paid leave from their employers, and often take a year off work without losing job security. So the group have a long journey together. It's the perfect setup for an epic letdown.

Bell and her co-creator Sarah Scheller were in Scheller's kitchen about seven years ago when it occurred to them that there was a gaping hole in onscreen representations of parenthood. Scheller had been in a mother's group, and Bell had seen her sister, too, navigating life as a mum.

"I wasn't a parent, I wasn't pregnant, I'm fairly political, and I was just appalled that I hadn't seen what she was going through on screen," says Bell, who was eight months pregnant when the show was given the green light by the Australian Broadcasting Corporation. "They went, 'We're on board, Go!' I went 'What?' I had this enormous belly, I'm about to have my first baby, I'm thinking, 'This is nuts.'" She was Skyping into meetings while breastfeeding in pajamas and Ugg boots just eight weeks after birth.

I think we've been mansplained for most of our lives, so it's absolutely essential that women who have been in these experiences are speaking to other women about them.

The show is a comedy, but, like Catastrophe and Fleabag, two shows that share some lifeblood — a strong female creator/lead whose point-of-view is taut enough to warp the world presented onscreen; a curious mix of comedy, confabulation, and sudden grief — The Letdown is not afraid of delving into the complex feelings women encounter realizing that, rudely, they are adults, and responsible for their own lives.

Bell is a stage actor with her grounding in dramatic roles, and her ability to wrench your feelings sneaks up on you when, for example, her character remarks upon the fact that her beloved late father will never meet her daughter. And Bell is quite serious about the importance of representing women's stories.

"I think we've been mansplained for most of our lives, so it's absolutely essential that women who have been in these experiences are speaking to other women about them," she says.

Where the show is particularly smart is in acknowledging that how well you are dealing with new motherhood is subjective — if feeling like a sh*tshow has been normalized, you might well feel pretty good about the whole thing. When the dad in the mum's group asks Audrey if she missed her baby after a day back at work she asks if it's bad to say, "No." "That's what makes you a great mum," he replies. "You're honest."

Perhaps that's why the show has resonated with an audience who has never taken a meat tray home from a pub trivia night.

Bell says that Netflix just let them "do our thing" without worrying about dropping in American vernacular. "They're happy to see a little piece of Australia," Bell says of the show's audience. "It doesn't matter what [you] call a stroller or a pram, or a nappy or a diaper, we understand. We understand!"

She is enthusiastic of the way disruptors like Netflix have pushed the boundaries somewhat on "American programming." (Borgen, anyone?) "I actually think it's very good to have to translate other cultures," she says.

In the U.S., the conversation around birth and motherhood has opened up in recent years, in part due to an acknowledgement of the maternal health crisis here. In that context, artists have created sometimes alarming, often dark and difficult works. (And then of course there was this.) The U.S. doesn't "take" darkness as ironic — perhaps why Elle writer Sadie Doyle felt The Letdown was "bleak" (not at all my reaction). The Office creator Ricky Gervais has said of the difference between Brits and Americans, "We mercilessly take the piss out of people we like or dislike basically. And ourselves. This is very important... We don’t want to watch a bunch of idiots having a good time. We want them to be as miserable as us. America rewards up front, on-your-sleeve niceness."

Perhaps we can learn something from the Australian instinct to make light — to run for the hills when things get tough, tilt our hand toward a Picnic At Hanging Rock situation, then tack back to a place where we can mercilessly make fun of ourselves and our situation, then drink a beer and have some carrot cake.

That's certainly Bell's approach on the phone (it was hard not to laugh over the top of her speaking). She has a 4-year-old son, Augustus, with her partner, actor John Leary, and she says he is still not sleeping through the night. "It's just failure, just nightly failure."

Bell seems, to me, like the friend you are secretly glad became a parent because you know the ~content~ will be amazing. "Your relationship to poo really changes once you have a child," Bell notes when I bring up potty training, "just in constant contact with someone else's poo."

So, will there be a season two of The Letdown?

I should bloody well hope so.

CORRECTION: This article previously misspelled Sarah Scheller's name. It has been updated to reflect the correct spelling.