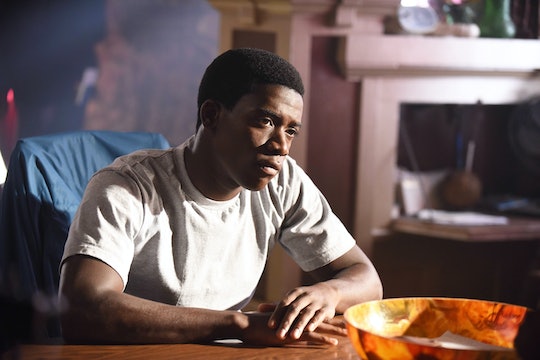 Though a lot of shows ended this year, there were also a lot of new TV shows to get hooked on. Snowfall, FX's new drama centered around the start of the crack epidemic in L.A., is one of those shows. The hit series is so popular that it's already been renewed for a second season, ahead of the first season's finale. So when does Snowfall Season 2 premiere? Fans will have a little bit of a wait.

The second season isn't expected to air until 2018, according to Variety, who broke the news about the shows renewal during the TCAs. This is to be expected since there's typically a year between seasons for summer shows. The first episode of the season aired on July 5, so fans can probably expect Season 2 to begin airing around the same time next year.

Thus far, Snowfall has seen success amongst both fans and critics. The show was co-created by Oscar and Emmy-nominated writer and director John Singleton, and stars newcomer Damson Idris as Franklin Saint. As a young entrepreneur, Franklin attempts to use crack dealing as a way to power and to get money for himself and his family.

Snowfall also follows Gustavo "El Oso" Zapata (Sergio Peris-Mencheta), a wrestler who gets involved with a power struggle within a crime family; Lucia Villanueva (Emily Rios), the daughter of a Mexican crime lord, who hopes to make a name for herself and get out from under her father's thumb; and Teddy McDonald (Carter Hudson), a sketchy CIA operative who begins an off-book operation to fund the Nicaraguan Contras and has a dark past.

Over the course of the first season, it's already become clear how the crack epidemic has changed all these characters lives, and not really for the better. As Franklin continues to get the power he wanted, he only wants more. Based on the trailer› for the season finale, it appears that Franklin may make a decision he won't be able to come back from.

Similarly, Teddy has his hands full, trying to regain control over the situation in Nicaragua, while Lucia is doing her best to keep control over her family. At best, the season finale will see a shift in power for some of the characters; at worst, someone won't survive it. Thankfully, no matter what happens, fans know the show will continue on after the finale comes to an end.