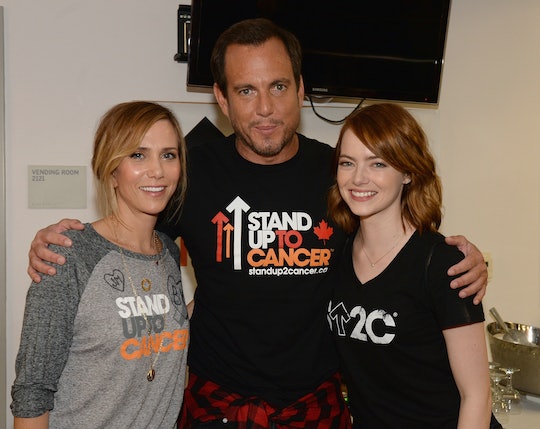 It's an event that's always star-studded, but its aim is so much more important than paparazzi flashbulbs going off. This yearly event is always fun and always full of famous people, but it actually does something real by night's end: raising funds for groundbreaking research to end one of the deadliest diseases out there. So, this year, when does the Stand Up To Cancer telecast air?

The answer is this Friday, Sept. 7 at 8 p.m. EST — just in time for you to catch all the action, with proceedings starting with a live telecast. And with a celeb-heavy line-up, this year should be especially interesting, according to the show's site. Max Greenfield, Tyler Posey and Brenda Song are presenters; Uzo Aduba and Beth Behrs are making special appearances; and Katie Couric, Matthew McConaughey, Reese Witherspoon, Jennifer Garner, and Kathy Bates are also RSVP'd as attendees. That's a lot of star power to tune in for, not to mention that Bradley Cooper has taken on an executive-producer role in overseeing the evening, as a press release on the organization's site explains.

This year is also special in that it marks the 10th anniversary of the fundraiser live-broadcasting its presentation. In honor of a decade of struggling for solutions, as the organization's site explains, two different segments of the evening will take place: A digital "live show" will be available at 7 p.m. EST on Facebook, YouTube and Twitter, while, at 8 p.m. EST, the live televised portion will begin, viewable basically everywhere — ABC, CBS, FOX, NBC, Bravo, E!, HBO, and Hulu... to name a few.

The organization, which has attracted a huge star following over the years from Robert Pattinson to Tom Hanks, and boasts Couric as one of its cofounders. The newswoman lost her first husband, Jay Monahan, to colon cancer in 1998, according to Parade. As she explained in 2016 to Variety, one of the problems in the longstanding search for a cure is that cancer "is different in every single biology... it can outwit its fiercest opponent. So we just have to keep figuring out ways to say ‘oh, no you don’t’ to cancer.”

Variety also reported that past cancer survivors, including Shannen Doherty while still in treatment, have attended the gala over the years. Many stars who have lost family members to cancer, including Gwyneth Paltrow, whose dad, Bruce lost his battle with throat cancer, as she told People, have pledged time and money since the organization was founded. Parade also reported that Bates is a cancer survivor, and Joe Biden, who lost his son to the disease, has attended the event in past years. Cooper's involvement stems from the loss of his father from lung cancer, as reported by The Hollywood Reporter.

What's more, over $480 million has been pledged over the past 10 years of the telecast in support of SU2C’s work, according to the organization's website, and SU2C researchers have contributed to FDA approval of five new cancer treatments.

"We have the power to make cancer powerless and perhaps even end it but it takes research and that requires funding," Paltrow said in 2012, according to the Daily Mail, giving a speech as part of the organization's launch across the pond. "...I am so proud to be standing up to cancer for my dad." The actress lost her father to the disease in 2002 while on vacation with him in Italy, according to the Daily Mail.

For more about how to donate or get involved, watch tomorrow night's telecast or check out SU2C's donation page. The possibility of eradicating cancer in our lifetimes is an amazing thought, and we all can play a part in helping create that possibility.