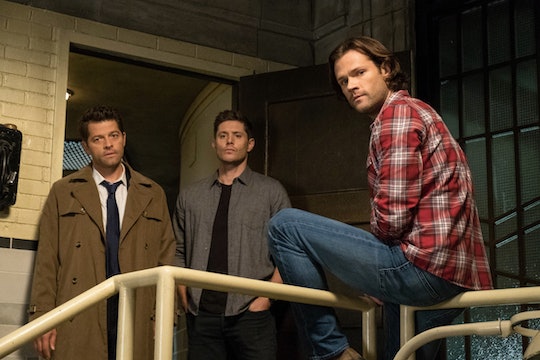 Following the mid-season finale of Supernatural, an episode titled “The Spear,” the Winchester brothers will take a brief winter hiatus for the holidays — but don’t worry, they’ll be back soon. The long-running CW staple that has literally been to hell and back is currently on its 14th season (with no visible signs of stopping), and fans are still clamouring for more of the angel and demon-filled world. So after a much-needed Christmas break, when does Supernatural return in 2019?

Sam, Dean, and of course, their best angel pal, Castiel, have had a heck of a season, which began with the main characters scattered and searching for one of their own. Since then, new pals have died (not that death is exactly permanent in this show), and others have made their presence known. Through it all, the men continue to help out those in need, as is their calling. The events of episode eight, “Byzantium,” set them up for a difficult fight against the Archangel, Michael.

Season 14 of Supernatural returns in January, the 17 to be exact. The first 9 episodes aired this year, so there are 11 remaining for a 20-episode season. Unless there are any weeks-off planned, this puts the season finale airing in late March. The season premiered on Oct. 11, 2018, and since the episodes air on Thursdays, one break was taken during the first half, for Thanksgiving. But aside from all of the shop keeping, the back 11 will feature one very special episode…

Wait, whose name is that on that script? It was recently announced that Jeffrey Dean Morgan is returning to Supernatural. However, fans may be disappointed to learn that this isn’t permanent. The acclaimed actor, who first stole our hearts as cardio patient Denny Duquette on Grey’s Anatomy (before switching to the side of evil as Negan on The Walking Dead) portrayed John Winchester, father to the aforementioned brothers, during the first two seasons of the fantasy series over a decade ago. He returned with a quick voiceover not long after departing, but he hasn’t been seen on screen since his big sacrifice during the Season 2 finale.

But in celebration of the series’ 300th (wow) episode, airing on Feb. 7, 2019, Morgan is set to reprise his role as the patriarch of the Winchester clan. So far, all that’s known is that the episode is titled “Lebanon,” yet another biblical reference for the after-life oriented show. Morgan celebrated his return by sharing this image of his hand resting on script bearing his name, but other than that, it’s likely the major details will be kept under wraps until closer to the airdate.

Clearly, there’s a lot to look forward to when Supernatural returns in the new year. As for the future of the series, as of now, it sounds like fans have nothing to worry about. In the past, stars Jensen Ackles and Jared Padalecki have expressed an interest in continuing the series, as long as people keep watching. But the reduced episode order has definitely been part of what’s keeping the men, who both have families with young children, on board. So even though there’s less Supernatural this season, if it means the show gets to keep going beyond 2019, that’s definitely a good thing.