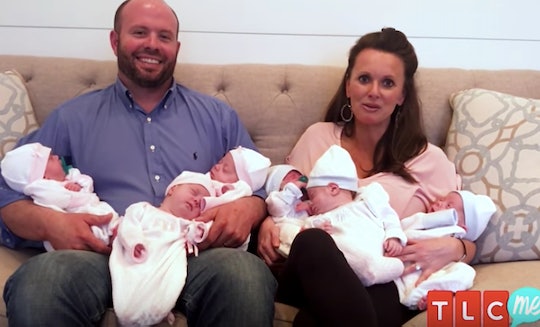 The names Eric and Courtney Waldrop probably don't ring a bell yet, but they will soon enough when a memorable new reality series — Sweet Home Sextuplets — documenting their adorable family kicks off this fall. But when exactly does Sweet Home Sextuplets premiere? The new TLC docuseries tracking six newborn babies and a sweet clan of 11 premieres next month and here's everything you need to know about the adorable family before their show airs.

Specifically, as People reported on Thursday, Sweet Home Sextuplets premieres on Sept. 18 on TLC and it will follow the lives of this new TV brood. According to People, parents Eric and Courtney hail from Albertville, Alabama and recently added six bundles of joy — three boys and three girls named Blu, Layke, Tag, Rawlings, Rayne, and Rivers — to a family that already included their three adorable sons, Saylor, Wales, and Bridge. Whew!

The sextuplets were born at just under 30 weeks’ gestation at Huntsville Hospital for Women & Children in December, as TODAY reported at the time. The babies were delivered by C-section and with help from a team of nearly 40 labor and delivery nurses, neonatologists, anesthesiologists and maternal-fetal medicine specialists, according to FOX 59.

As the family shared on TLC's teaser for the series, the babies ranged in weight from 2 pounds and 4 ounces to 2 pounds and 14 ounces but, amazingly, were all able to go home soon after they were born.

"It’s an amazingly joyful feeling to have all six babies at home with us," the couple told People in February after the babies were born. "Our lives have been forever changed... We are blessed beyond words and so excited to get life started with these sweet little miracles from above."

The couple first announced their pregnancy last year after fertility treatments, according to People, with neighbors having set up a 5K run to help raise money for their expenses.

"It should be something you are so joyful about... but we were scared to death," Courtney shared on the TLC trailer, after the couple was told that even after having had fertility treatments, the odds of conceiving sextuplets were very slim to begin with. Further, they were warned that sextuplets run multiple risks, from learning disabilities to serious complications with delivery.

This TLC show should be super interesting, with a behind-the-scenes look at Courtney's pregnancy and delivery already providing a fascinating look into their journey, according to TLC. What's more, the Waldrop babies are the first set of sextuplets from Alabama since 2011, according to TODAY.

Another fun fact? As People reported in August 2017, the couple has been together since middle school.

I can't even imagine how this family pull it all off, if you consider that they obviously have to also work for a living, and maybe, you know, eat meals and shower. If you've had more than one baby at the same time (my two oldest were 11 months apart), you know that those first few months tending to multiple sets of diapered delights, late-night feedings, and all the rest is pretty brutal. Worth it, of course, but brutal.

I'm sure hoping this family will have relatives to count on, as the Outdaughtered family has had, with an in-house grandma. If not, I really hope there are some helpful neighbors or reasonable babysitters in their town. But I guess we will just have to watch the show when it premieres in September to find out more!