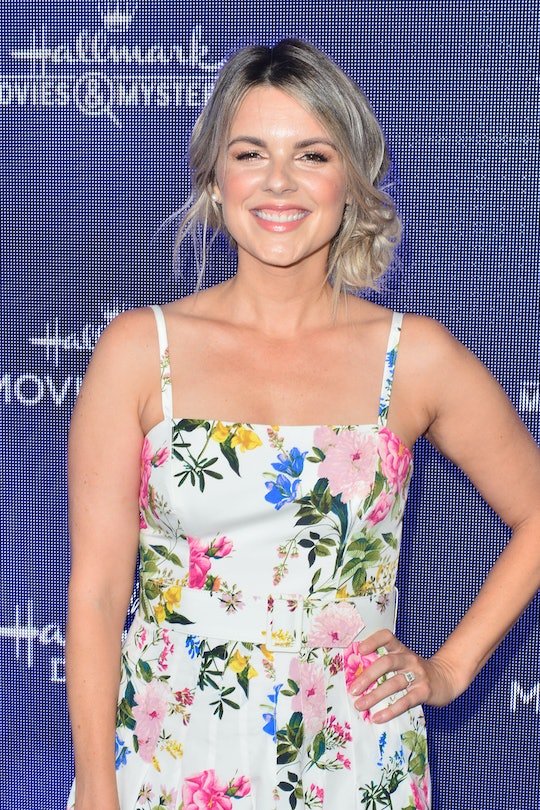 Get ready Bachelor Nation because there is one more stop before Paradise. Don't worry, they serve tea there. Chris Harrison announced on Monday that Ali Fedotowsky-Manno and Rachel Lindsay are taking the show to the airwaves. The former Bachelorettes are co-hosts of the new podcast Bachelor Happy Hour. It will feature your favorite former cast members and is going to be unmissable, so you need to know when The Bachelor podcast drops.

You'll be happy to learn that you don't have to wait one more minute to get insider perspective on Hannah's Bachelorette fate. The first episode of Bachelor Happy Hour dropped July 31 and the ladies aren't messing around when it comes to guests. Peter gives his first interview since After The Final Rose on the podcast episode. Plus, according to the show's description, "Demi talks about BFF Hannah's heartbreak."

Peter and Demi are two of my favorite newer cast members to look for love at the mansion, so I'm definitely excited to hear what they have to say. But it's Ali and Rachel who will be sharing their thoughts with Bachelor nation week after week.

I'm hoping they will share their honest opinions on the shows, rather than holding anything in. Ali, at least, definitely doesn't hold back. She told Us Weekly at the Hallmark Summer TCAs that, "Nobody goes on [The Bachelor and Bachelorette] for love and then they’re just surprised when they actually do fall in love." That might be true but ABC would probably prefer her to say something else. That means she's the perfect podcast host.

Ali definitely doesn't blame anyone for thinking that way. She told Us Weekly that she had fun on her mind first during her season and then happened to find romance. She's now happily married to radio host Kevin Manno (who she met after the show) and they have two kids. But if Ali were to go on the show today she said, "I [would] 100 percent be thinking Instagram followers. … I think to not think that way is kinda dumb,” she said. “Like … That’s gotta be in the back of your mind. … I’m an entrepreneur, I have an entrepreneurial type way of thinking.”

Rachel is of course getting ready to marry fiancé Bryan Abasolo soon, and recently celebrated at a party in Costa Rica with other Bachelor alums. She also recently lost a relay race to Hannah B. on Good Morning America, so she's always down for fun, another essential trait of a podcast host.

She hadn't watched any of the franchise before she was a contestant on Nick's season, and as the first black woman to be the Bachelorette there was more at stake when she decided to take the lead on the show. She told Self in 2017, "I could be a positive role model on TV for women my age, younger women, African-American women, and those trying to pursue a career in law or anything else."

It was also important to her that her that all of the bumps in her journey were on TV, too. "I could show the struggles I have as a career woman trying to find love. I wanted to be vulnerable in that way, and that carried me on to say, You know what? I'm gonna do it."

Ali and Rachel are the perfect co-hosting team for Bachelor Happy Hour. I don't doubt they'll give fans their honest opinion while sharing sage advice and a lot of laughs with their guests.