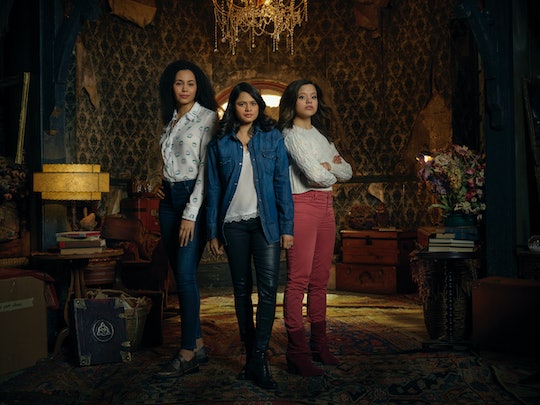 The 'Charmed' Reboot Is *Finally* Happening

The premise is just like the original series that aired on the same network years ago. Three sisters find out they not only have magical powers but that they’re the three most powerful witches in the world — the "charmed ones." And using their collective powers for good, they have the responsibility of protecting humans from the forces of darkness. While some recent TV reboots, like Fuller House or The Connors, are a continuation of the original series, this reboot is a totally new retelling.

So it’s no surprise that there are some key differences. The sisters in the original series were Halliwells and this time around, they’re the Vera sisters. And, in the original, before Rose McGowan was brought in as the long lost half-sister, the three original witches all shared both a mom and dad. In the reboot, one of the charmed ones is a long-lost older half-sister right off the bat. I’m not sure how that will play into the storyline, but the family’s history is bound to be important.

The setting is also going to be different. In the Charmed reboot, the sisters live in fictional Hilltowne, instead of San Francisco, which the original Halliwell sisters called home. They also all have names that start with "M" instead of the "P" names that fans remember. It's another detail that helps make the reboot its own rather than completely mirroring the original series. And in the original Charmed, Phoebe, the youngest sister, had the power of premonitions, but now, the youngest Charmed One has telepathy.

Since this is a total reboot of the original series that ran for eight seasons, there are bound to be some negative responses. Stars of the original Charmed, Holly Marie Combs and Alyssa Milano, both voiced their concerns over the reboot.

Although Milano didn't have any harsh words for the reboot itself, she did tell Entertainment Tonight that she’d hoped that the producers would have come to her and the rest of the original cast to allow them to be involved in some way. "But having said that, I do hope that it reaches the newer generation and impacts that generation the way ours was able to do for its generation," she told the news outlet.

Combs revealed her issue with the Charmed reboot on Twitter back in May. "Let me say first that I appreciate the jobs and opportunities the Charmed reboot has created," she wrote. "But I will never understand what is fierce, funny, or feminist in creating a show that basically says the original actresses are too old to do a job they did 12 years ago. I hope the new show is far better than the marketing so the true legacy does remain."

At the Television Critics Association press tour in August, the cast said that although they are choosing to focus on the positive aspects of the Charmed reboot, they respect Combs’ opinions. "Of course, you can’t help but feel disappointed because I think the script is fantastic," Madeleine Mantock, who plays oldest sister Macy, said. "I really hope maybe she’ll see it and like it."

Much like my adult self, the teenage me watched way too much television, including almost everything on the WB, and then the CW. I think this is the perfect time for a Charmed reboot, especially since supernatural dramas never really go out of style. It’s been more than 10 years since the original Charmed ended. So, I say bring on the witches.