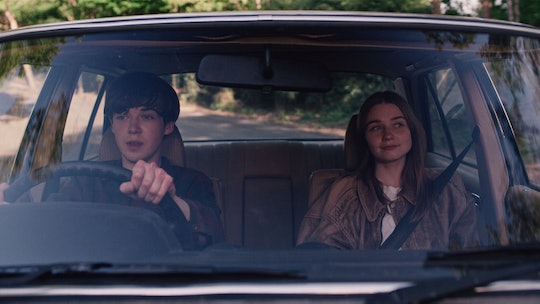 It's a new year, with a new bingeable Netflix series at the ready. Assuming you've already worked your way through the series' first season, you're now probably wondering when does The End of the F***ing World Season 2 premiere? Sadly for all of you (for all of us), the show has not yet been renewed for another installment. But as buzzed about as this first season has been, I'm pretty confident that a second season is on the way. There's also the fact that the final episode left the story fairly open-ended. James and Alyssa could go anywhere from here. Warning: this post contains major spoilers!

The End of the F***ing World premiered on E4 in the UK, and globally on Netflix starting on Jan. 5. It is a darkly comic coming of age story about two misfits. James, (played by Alex Lawther) is a self-diagnosed psychopath who decides to kill a human after getting bored with killing animals. Alyssa (played by Jessica Barden) is teenaged angst personified. Together they set off on a surreal road trip to find Alyssa's real father. The result is a highly engrossing story about murder, young love, and the uniquely acute pain of being a teenager. Already it has gotten glowing reviews from critics.

The series was inspired by the graphic novel of the same name (sans censoring) by Charles Forsman. Apparently the show's director, Jonathan Entwistle, chanced upon a page from the comic in a London garbage bin, and thus the idea for the series was born. The series was such a hit with viewers, that many are already excited to see if the show will pick up for another round. The ambiguity of the show's ending definitely lends itself for the story to continue on.

The show wraps up with James telling Alyssa he's going to sacrifice himself to the cops for her. He hits her in the head to make their story look convincing, then takes off down the beach, gun in hand, drawing the attention of the police. The screen fades to black and the sound of a gunshot is heard. So who shot the gun? Did James' plan work? Where does the couple go from here? With an ending like that, it could definitely go anywhere. Reddit user yumario pointed out that in the original comic, the ending is far less open-ended. In that, James definitely sacrificed himself for Alyssa, and that's the end of the story.

However, plenty of other shows have decided to renew for a second season once the source material ended. The Handmaid's Tale and Big Little Lies are two recently examples. It could be that the show's creators left the ending deliberately vague to keep the door open for a second run. Theories are already swirling about what could happen next for the offbeat lovers. Perhaps Alyssa will indeed be left on her own. Maybe the next season will show the two of them going to trial. Maybe everything turns out magically in the end and James and Alyssa somehow manage to escape the cops and run away on Alyssa's father's boat.

At the same time, though, other people have made impassioned arguments that the show's most perfect ending is the one that Forsman originally dreamed up. James' journey ends with his death, because his story really does feel complete. To continue the story might necessarily involve separating the show's two charismatic leads, whose chemistry together was essential for making the show as delightful as it was.

There's definitely an argument to be made that the show should end right where it is. But personally, I always want a little more.