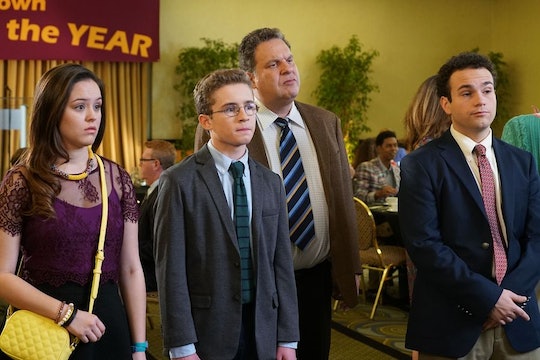 'The Goldbergs' Won't Be Off Your TV Screens For Long

Everyone loves period shows and The Goldbergs has been proof that the same love extends to comedies that focus on a specific time period as well. And since Season 4 continued to be funny and fun to watch, when does The Goldbergs return for Season 5? Not surprisingly, the series has already been renewed for both Season 5 and 6, so it’ll definitely be back to bring viewers all of the best and most cringe-worthy parts of the '80s. Since every season has premiered at the end of September and it's a network show, then the Season 5 premiere of The Goldbergs will likely also be at the end of September 2017 when many other fall shows are slated to return.

The show is loosely based off the life of series creator Adam F. Goldberg (and there’s even an episode that explains how he came to perpetually include his middle initial in his name) and over the years, the Goldberg family has managed to bring steady laughs and just the right amount of '80s nostalgia. Although it’s still a sitcom, The Goldbergs has included steady prolonged storylines over the past four seasons involving the Goldbergs’ teenage kids’ love and social lives while still remaining (loosely, very loosely) based off the real Goldbergs’ life experiences.

But the success of the ABC comedy should also be credited to Wendi McLendon-Covey as Beverly Goldberg, whose bleeped swear words are always placed at exactly the right time and make the smother of a mother that much more likable. The network has plenty of successful shows like Grey’s Anatomy and Modern Family and, according toVariety, The Goldbergs averaged 6.1 million viewers during Season 4, bringing it in right behind those shows and making it a highly successful series currently on ABC’s roster. Which totally explains the renewal of both Season 5 and 6.

Since it will probably return for Season 5 in September, fans won’t have to wait too long to find out what happens after high school for Erica and how Barry and Lainey will survive after this. It’ll also be no time at all before Adam’s adorable squeaky voice drops down a couple of octaves for good, which might be a good thing or a bad thing, as he’s forever Beverly’s favorite and the baby of the family.

But considering The Goldbergs will probably return in September, though — unlike most cable network shows these days which make fans wait almost a year between seasons — viewers will be privy to more Goldberg antics shortly after summer is over. Thank goodness for that.