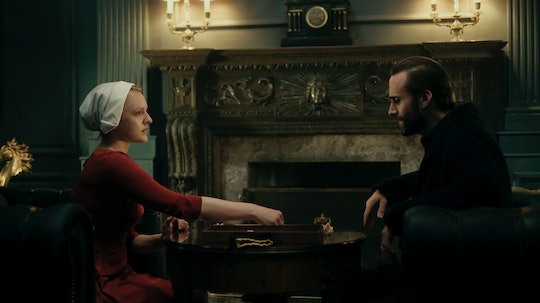 'The Handmaid's Tale' Is Being Released In A Unique Way

The Handmaid's Tale premiered on Hulu last week, but the whole first season wasn't released like many fans expected it would be. Instead, only the first three episodes of the season came out. So when does The Handmaid's Tale air? There will be a new episode released every Wednesday on the streaming platform.

The popular series is an adaptation of Margaret Atwood's bestselling novel of the same name and follows protagonist Offred as she navigates the new United States, now called Gilead. Offred is a Handmaid, a class of fertile women whose sole purpose is to the bear the children of Commanders whose wives are infertile. The show jumps between Offred's present day and flashbacks to the time before Gilead and the events that led to this change in the country as well as Offred's training to become a Handmaid.

Critics have applauded the show's form of storytelling, visuals, and its timeliness in "Trump's America." It's no surprise then, that the series, which has only released four episodes thus far (three last week and one this week), has already been renewed for a second season. The show has been watched by more Hulu viewers than any other series premiere on the platform, Variety reported, and Season 2 is set to premiere sometime next year in 2018.

The show stars Elisabeth Moss along with Joseph Fiennes, Yvonne Strahovski, Alexis Bledel, Madeline Brewer, Ann Dowd, O.T. Fagbenle, Max Minghella, and Samira Wiley. The series not only focuses on Offred, but also on the other Handmaids who all handle their fates differently. There are those who outright resist, those who quietly resist alongside Offred, others who are resigned to their fate, and those who are happy to serve under this new regime.

Despite the title, The Handmaid's Tale also looks at the lives of other woman who are not Handmaids. Dowd plays her role as Aunt Lydia a little too well as she engrains Gilead's doctrines into the minds of Offred and other Handmaids. Aunt Lydia, as well as the other "Aunts," are not actually related to the Handmaids, but are more like their abusive, somewhat-terrifying teachers.

There's also the infertile wives of the Commanders, like Serena Joy, played by Strahovski. Though Serena resides in the most powerful position a woman in this society can have, it's also evident that she doesn't have any real power at all. This bold and horrifying tale continues to draw in more and more fans, making it primed to become an Emmy contender.

If you haven't watched The Handmaid's Tale yet, you can begin streaming it now on Hulu.