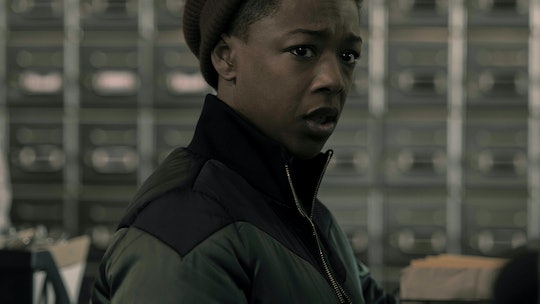 Season 3 of The Handmaid's Tale may have just ended on Aug. 14, but the Hulu original has already promised fans more stories in the future. Prior to the third season finale, the network announced the award-winning drama was renewed for a fourth season. Since then, viewers have been trying to figure out when The Handmaid's Tale Season 4 premieres. However, it looks like everyone will have to hold out a little longer before the details of the show's return are revealed.

Warning: Spoilers for Season 3 of The Handmaid's Tale ahead.

As of this write-up, Hulu has yet to share the release date for Season 4 of The Handmaid's Tale. But, of course, it's possible to speculate a potential air date for the fourth season premiere if you take a look at previous seasons. The first and second seasons made their debut on April 26 and 25 respectively. The network then switched up the schedule for The Handmaid's Tale Season 3, which was released on June 5. And although the more than month-long gap between April and June seems significant, it's likely the Hulu series will come back sometime within the given time frame in 2020. At least, as long as The Handmaid's Tale team is able to stick with a schedule similar to past seasons.

While the official premiere date for Handmaid's Tale Season 4 is merely a guessing game at this point, fans have plenty to look forward to in the upcoming season. Throughout Season 3, fans watched as June (Elisabeth Moss) became an active fighter against Gilead and "actually accomplished something," as explained by executive producer Warren Littlefield in an interview with Entertainment Tonight. Littlefield then shared his thoughts on the Season 3 finale and what challenges the writers have ahead of them.

"We have a sense of joy and accomplishment for what she accomplished for those children," Littlefield said. "We also have to figure out how to get her out of the well because at the moment, she's at the bottom of a well. But we will."

Meanwhile, creator Bruce Miller shared what's next for June in Season 4. "I always feel like we let her lead us," he told ET. "At the beginning of the show, I was just shocked that she made it through each episode alive and now she seems to be making it through episodes and getting stuff done… Whatever comes after that is is her next step."

No matter what happens in the fourth season, fans are itching to find out what happened to Hannah (Jordana Blake) and Nick (Max Minghella). Luckily, The Handmaid's Tale team wants to see more from the characters, too. When ET asked Moss what she wants to see in Season 4, the actress smiled coyly and stated, "Hannah." Moss also expressed her desire to see more of Nick.

"I think it was an interesting move not to make [The Handmaid's Tale] into a love story. I think it was interesting we put that to the side," Moss said. "At the same time, I love the Nick-June relationship as much as anyone. I miss Nick, too. I think he should come back."

Miller then echoed his star's statement. "I don’t think I saw enough of [Nick] this year," Miller said. "Max is such a wonderful actor and we love having him in the show. It’s just, you know, you follow June and the flow of that sometimes leads you away from all the stories you want to tell.”

Hopefully, Moss and Miller's dreams come true and storylines involving both Hannah and Nick rise in upcoming episodes of Season 4. Nonetheless, fans have some time to kill before any announcements in regards to the new season are made. So let's enjoy the calm before the storm — no matter how long it takes.

The Handmaids Tale Season 3 is now streaming on Hulu.