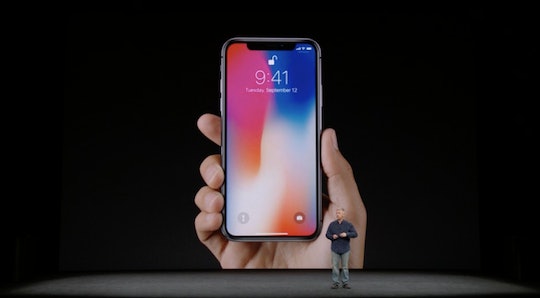 Here's Everything You Need To Know About The New iPhone X

After a series of tweets, the world latched on to rumors of the most premium iPhone to date. And on Tuesday, the latest developments in the world of Apple finally became a reality. With a slew of new features and hype leading up to the big reveal, many have questions about Apple's newest toy. Perhaps most importantly, when does the iPhone X come out?

Announced on Tuesday, as TechRadar reported, this pricy piece of tech is expected to available for purchase on October 27 with a ship date of November 3. The tweet that started all of the questions circulating about the iPhone X was courtesy of iOS developer Steven Troughton-Smith. The developer announced three coming iPhone models on Saturday: iPhone 8, iPhone 8 Plus, and iPhone X.

The X, in particular, is the fanciest iPhone yet with features such as a sleek, fresh design, complete 3-D facial recognition software for unlocking the phone, a crisp edge-to-edge OLED screen, and higher quality cameras. NPR reported that one of the biggest changes is the loss of the iPhone's iconic home button.

A favorite addition coming with the iPhone X amongst Apple aficionados is the new animated emoji feature, known appropriately as the "Animoji," as The Guardian reported. Animojis will be a part of the new iOS 11 and can be reportedly be created from face scans and potentially even your voice to reflect facial expressions in a wide variety of animated characters — including cats, robots, unicorns, smiley poo, and many more.

The iPhone X is being released in honor of Apple's 10th anniversary, perhaps due to its non-sequential Roman numeral. The X comes with a bigger price tag, at $999. But, Apple fans are hopeful that the improvements and features of the phone will justify its cost.

Now that these new details are out there, many are wondering whether the public will be willing to drop a grand on a phone. According to CNN, prior-Apple analyst Gene Munster, is expecting between 30 percent and 40 percent of Apple's current customers would be willing to pay the $1,000 or more to buy the new iPhone. Munster told CNN that this is because iPhones are perceived as having a high return on investment:

Your greatest return on investment for any piece of technology is your phone. People have become more comfortable spending lots of money on their phones.

Rumors suggested that a limited number of the latest iPhone X will be made available for purchase by the public directly following the launch date. As has come to be expected of Apple product releases, hoards of loyal fans will likely flock to their computers to pre-order now that the date and time of release has been announced, cost be damned.

While a $999 phone is certainly not in everyone's budget, those willing to part with a pretty penny to get the latest tech can do so on October 27, when the phone goes on sale. Try not to miss that home button too badly.