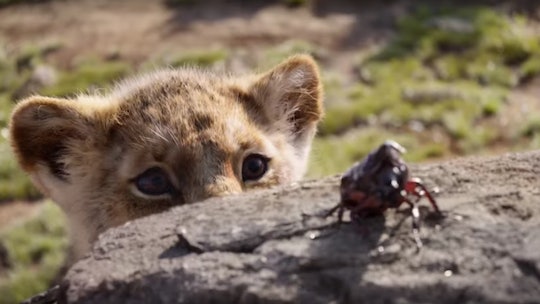 Mark Your Calendars: Disney's New 'Lion King' Will Hit Theaters Before You Know It

When I was a kid, like so many other millennials, The Lion King was everything. It had cute characters, catchy songs, and plenty of drama. And the beloved film is returning in a new form this summer, and fans can hardly wait to see it. Disney has put together an all-star cast, including Beyoncé, Donald Glover, Billy Eichner, Eric Andre, Seth Rogen, John Oliver, and more. And if you're wondering when The Lion King comes out, you're in luck because the upcoming live-action rendition of the Disney classic is expected to hit theaters in just a matter of weeks.

The Lion King is due to hit theaters everywhere this summer, though exactly when depends largely on where you are. According to Deadline, international rollout for The Lion King begins July 17, and the film will be available in theaters in the United States on Friday, July 19, so mark your calendars now. And if you happen to be across the pond around its release date, don't fret — the Radio Times reported that The Lion King will hit theaters on the same day in the United Kingdom, and many other territories.

Like countless fans, the film's stars have already started buzzing about The Lion King ahead of the premiere, though the press run hasn't officially begun just yet. CinemaBlend reported that Keegan-Michael Key, who will play Kamari — one of Scar's three hyena pals — in the Disney film, joked that he was dreading doing press for The Lion King for one very unexpected reason: his co-star, Beyoncé. Key told CinemaBlend that he wasn't mentally prepared to field tons of questions from reporters about working alongside the one and only Beyoncé, though he admitted he understood the interest. After all, it's Queen Bey we're talking about.

So far, Disney surprisingly hasn't put too much emphasis on Beyoncé's role in the film, though it did recently release a trailer finally teasing her voice as Nala — but it didn't show Queen Bey singing, so the world will have to wait until mid-July for that treat.

Lion King fans did, however, get a taste of the singing to come in a teaser released earlier this year with a snippet of Timon and Pumbaa — Eichner and Rogen's characters — singing the iconic melody from the Disney classic, "Hakuna Matata," as they trotted along in the final moments of the clip.

Tickets for The Lion King aren't on sale yet, but moviegoers can sign up for alerts from Fandango to ensure they'll be the first to know when they're available. Through Fandango, you can lock in tickets and secure assigned seats to optimize your movie-going experience, so definitely put that on your to-do list.

Adults and kids simply can't wait to see new The Lion King, and thankfully that wait is nearly over. The film will arrive in most theaters on Friday, July 19, and I have a feeling this film is going to be at the center of a lot of lasting family memories. So definitely don't wait to check it out, whether you're bringing the kids along, sneaking out for a date night, or just taking it in alone.