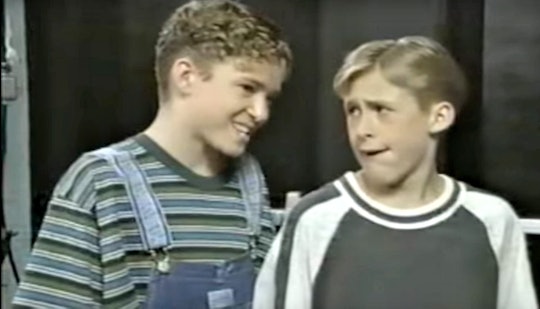 'The Mickey Mouse Club' Is Getting A Revival

Disney has been reaching into its bag of tricks recently by remaking and readapting a lot of its classic movies for newer generations, like the recent live-action versions of Beauty and the Beast and the Jungle Book. But now the company is digging into the TV vault, much to the great pleasure of anyone feeling a little nostalgic for the good old days. On Tuesday, Disney announced that it will be launching a new and improved Mickey Mouse Club series soon. Try to contain your M-I-C-K-E-Y chants, because the network hasn't confirmed exactly when The Mickey Mouse Club will return, but rumor has it that it will be sometime later this year.

As if you needed further proof that we are definitely living in the future, it won't be a television show, but a Facebook exclusive series called Club Mickey Mouse! That's good news for families without cable subscriptions, since a lot of kids missed out back in the day when the show was exclusively on the Disney Channel throughout the early '90s (either because their parents couldn't — or wouldn't, thanks Dad — pay for the premium cable channel.

Now, everyone will be able to watch online through the social network, just like back in the good old days after the show's original launch in 1955.

This is very exciting news, because while the remakes of classic Disney movies can be hit or miss, and are the source of some consternation for purists who prefer the original versions, The Mickey Mouse Club was a free-for-all variety show, with music, dancing, and super cheesy skits.

Without The Mickey Mouse Club, there would be no Britney Spears, Justin Timberlake, or (gasp!) Ryan Gosling. The world can be a terrible and scary place these days, so making room for some cheesy (and amazing) young talent to schmooze and play around with popular pop star guests is sort of just what everyone needs. Especially with an entire generation of millennial parents and their kids to please.

Given the trend of nostalgia programming, though, the new version will likely stay true to some its classic themes — expect lots of dancing, music, and terrible physical comedy. Hopefully, just like with the remakes of its films, this new and improved Club Mickey Mouse! will be more inclusive in its casting. (Crosses fingers.)

The new show might not have the same format (or those themed days of the week, like Wednesday's "Anything Can Happen Day," which as a grown up, still sort of holds true). Josh Mattison, vice president of digital ad sales for Disney Consumer Products and Interactive Media, told CNBC that he's excited about the kind of freedom that comes with the Facebook format:

So don't be surprised in the early days of Club Mickey Mouse! if the installments vary in length and content while they figure out who's watching and what works.

Disney hasn't announced the cast members yet, but they're going to work with Maker Studios, their in-house talent company, to fill it out. Even without a confirmed cast of regulars, it's very easy to imagine some of today's biggest musical names getting a chance to mingle with the up and coming Mouseketeers in the Club House.

At the very least, it will be a source for new and often repetitive songs to get stuck in parents' heads. But, hey, at least it will be free on Facebook.