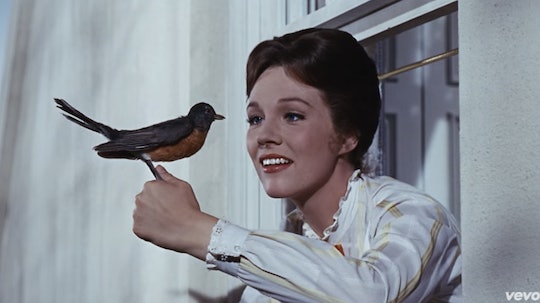 When Does The New Mary Poppins Movie Come Out? Disney Has Finally Picked A Date

It's hard to believe there was ever life before Disney. What did we do with ourselves? How did we keep ourselves entertained, or communicate with each other beyond the basics? Disney is all, right? If you thought you loved the House of Mouse before, I have big news for you. Disney has announced a release date for the new Mary Poppins movie, and the Internet is losing its marbles over the news.

More Like This
‘Bluey’ & More Great Shows Your Kids Will Love To Stream On Disney+
Check Out The Official Trailer For Pixar’s New Movie Luca
Netflix’s Animated Movie Musical Vivo Stars An Adorable Kinkajou
Here's Everything We Know About 'Paw Patrol: The Movie'

The new movie is set to be released on Christmas Day (Dec. 25) 2018, according to Disney Studios, which released a statement this week, according to CNN Money. Which means my family had better just deal with having a tub of movie theatre popcorn and some Milk Duds for Christmas dinner that year because I know what we'll be doing. This new movie is said to be a sequel to the classic 1964 Mary Poppins starring the (nearly) inimitable Julie Andrews and forever young Dick Van Dyke.

I say Andrews is nearly inimitable, of course, because Disney Studios has cast someone so perfect in the role of Mary Poppins, you won't believe it. British actress and multitalented Emily Blunt (Into The Woods) will star in the titular role in Mary Poppins Returns. And as if that's not wonderful enough, Lin Manuel Miranda (you might have heard of him; his play Hamilton has basically turned him into the winner of Broadway forever) will play a friend of Mary, a street lamplighter called Jack.

In this sequel, we will meet back up with the children of 17 Cherry Tree Lane from the original 1964 version of the movie as adults living through the Depression. It turns out they haven't grown up to enjoy a "supercalifragilisticexpialidocious" (take that, spell check!) life, and hope that Mary Poppins and her special bag of tricks will be just the thing to remind them of the simple joys of life.

Some fans might view the Mary Poppins franchise a little differently since the movie Saving Mr. Banks was released in 2013. The movie told the story of Mary Poppins author P.L. Travers and her complicated relationship with Walt Disney, who directed the movie himself in 1964. Travers battled Disney for nearly 20 years over his version of Poppins, which she felt differed too greatly from the books.

Luckily, we might be in for a real treat with Mary Poppins Returns, as Disney Studios announced this new movie would be largely based on a "wealth of material in P.L. Travers' seven additional novels".

The new movie will be directed by Rob Marshall, who worked with Blunt in Into The Woods. Marshall said in a statement,

The iconic original film means so much to me personally, and I look forward to creating an original movie musical that can bring Mary Poppins, and her message that childlike wonder can be found in even the most challenging of times, to a whole new generation.

All in all, the reboot looks to be a fantastic one. One quick note though, Ms. Poppins: No spoonful of sugar this time around. In the 21st century, we prefer a spoonful of agave or honey, if you please.