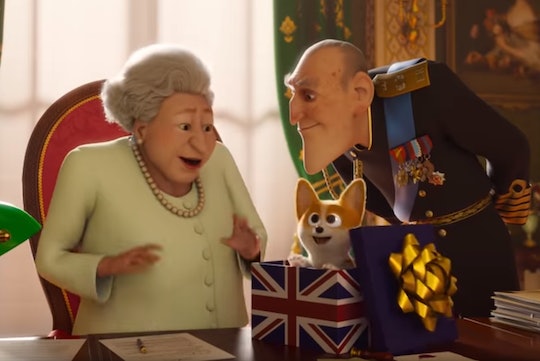 Everything You Need to Know About The Royally Adorable Animated Film, 'The Queen's Corgi'

There are certain human/animal relationships that capture hearts all across the globe. One of those most celebrated is currently being memorialized on film, in an animated tale of a monarch and her beloved pups. So, when does the story, The Queen’s Corgi, come out so we can all enjoy this sweet friendship?

Although no date has been officially announced yet, according to the film’s IMDb page, it’s set to release on Feb. 13, 2019 in the Netherlands and on April 4, 2019 in Portugal. Those dates can change, of course, but if the film releases that early in the Netherlands it’s not outrageous to think it could premiere in early February in the United Kingdom. The Sun also reported that the movie is expected to show up in U.K. theaters in the spring, and it’s reasonable to think that agreements would allow for it to run in the country where it is set before releasing it to the rest of the world — that’s what Marvel has done with several films, according to DigitalSpy.

Allowing for a little lag time lets a film build buzz, and can even provide a bit of a test market for the team to make tweaks, as DigitalSpy reported, which cited the example of the post-credits shawarma scene in The Avengers that was added after the film’s U.K. release and before it hit the U.S.

Nonetheless, it makes sense that it shouldn’t be more than a few days, if any delay at all, before The Queen's Corgi would come to the United States since audiences on this side of the ocean are just as enamored of the Queen’s famous furry buddies.

The story planned for The Queen’s Corgi sounds simply adorable: The trailer shows the pup, Rex, from his arrival at the palace as he takes over everything from the staff to the royal bed. According to Variety, Rex eventually loses track of his mistress and stumbles across a canine fight club. During his epic journey to find his mistress again Rex finds love and his true self, as Vanity Fair explained. The film is directed by Ben Stassen and was written by Rob Sprackling, who wrote Gnomeo & Juliet, according to Vanity Fair.

The monarch received her first Corgi, Susan, as a gift on her 18th birthday in 1844, according to The Guardian. In 2015, she stopped breeding her line of corgis because she didn’t want to leave any dogs behind after she passes away, and laid her last Corgi, Willow, to rest in April 2018, according to TIME. Willow’s death marked the first time the queen had not owned a corgi since World War II, according to The Guardian. She does still have two dorgis — a cross between a corgi and a dachshund, as The Telegraph reported — and she made a new canine friend this year.

She famously allowed the newest royal pup, Meghan Markle’s beagle, Guy, to ride alongside her in her car just a few days before the royal wedding between the Duke and Duchess of Sussex, according to Harper’s Bazaar. Guy already has his own book, His Royal Dogness, Guy the Beagle, which goes on sale in November, according to the book’s publisher.

Can an animated follow-up about Guy and the dorgis be far behind The Queen’s Corgis...? Hey, dreams can come true, right?