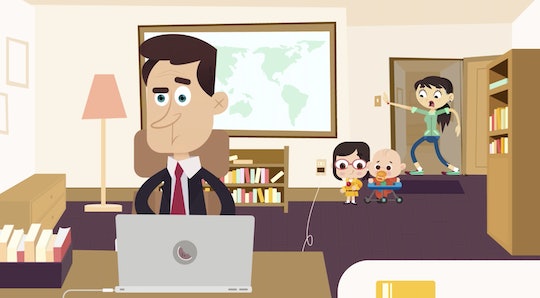 When Does The Viral BBC Family’s Show Premiere?

When Professor Robert Kelly woke up and got ready for work in March, he had no idea he and his family would be catapulted into internet fame. Nearly a month later, his family-interrupted BBC interview has become practically an internet legend, and thanks to writer Lauren Martin, they're getting their very own animated show. When does the viral BBC family's show premiere? Martin just released the show's first teaser, a 3-minute prologue, to YouTube on Monday.

Just in case you need a refresher, Kelly, an expert on East Asian politics, was in the middle of giving an interview with the BBC about the impeachment of South Korea president Park Geun-hye. His 4-year-old daughter Marion threw open his home office door and strolled in with a swagger to give Vince McMahon a run for his money, only to be followed by her 8-month-old little brother James just seconds later — in a baby walker, no less. Kelly's wife Jung-a Kim came crashing in moments later to scoop up the kids from the room, after probably the longest 30 seconds of Kelly's life. All of this was of course broadcast live on the BBC.

Writer and show creator Martin was inspired to create an animated series inspired by the Kelly family, called The Adventures of Mina and Jack.

The premise for the show is adorable: The Adventures of Mina and Jack, follows the "globe-trotting misadventures" of a young girl named Mina, her baby brother Jack, and their dad, a U.N. official. In addition to the adorable animation style, it's got a very Carmen Sandiego meets Agent OSO vibe.

Meanwhile, the Kelly family is totally onboard with their newfound fame, and are excited to see their family's inspired adventures hit the small screens. In a press release, Kelly shared his approval for the show. "I thought it was so cute," he said. "My wife and I both laughed. They made me look suitably dorky." Kelly and his family are excited to see The Adventures of Mina and Jack hit the small screen soon, as he shared on Twitter on Monday.

As for that exact premiere date, interested fans will have to wait, but hopefully not for long. Speaking to Romper, Martin said The Adventures of Mina and Jack is currently in talks to secure a network contract, but mum's the word on exact release details yet. As Mina notes in the prologue video, "Stay tuned!"

Here's hoping that once The Adventures of Mina and Jack gets a premiere date, daughter Marion will host yet another amazing "BBC toddler" press conference to share the good news.