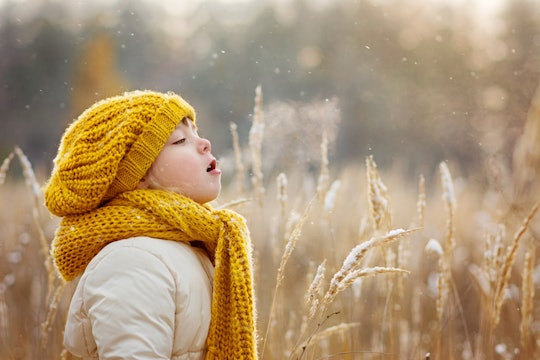 This Is When Winter Officially Starts, Though Some Might Find It Hard To Believe

When we think about autumn, we tend to envision the entire season as being nothing but falling leaves, bonfires, and apple everything. So it can come as a real shock when temperatures plummet below freezing in early November, or even when, in certain parts of the country, we see snow before Thanksgiving. That's when we think: Is winter coming early this year? Is the groundhog working overtime to make sure we're in coats til June? No and no. Temperature and decor notwithstanding, winter doesn't start until well into December.

Actually, the official start of winter 2018 in the Northern Hemisphere, according to the Farmer's Almanac — and who should know better? — falls on December 21, at 5:21 PM EST, to be precise. According to the astronomical calendar, the dates of each season are determined by the two solstices and two equinoxes that occur around the same time each year. Calendarpedia explained that the December solstice occurs when the sun is at its southernmost point away from Earth. In the Northern Hemisphere, this marks the beginning of winter; on the other end of the world, where the sun is now closest, it's considered the summer solstice, which means bathing-suit and ice-cream time. As the Earth moves through the following months, the position of the sun relative to us changes, and eventually we experience our June summer solstice while folks in the Southern Hemisphere start feeling the chill.

Before you go marking the date on next year's calendar, keep in mind that the date of the December solstice changes slightly each year. It can occur anywhere between December 20 and 23, and indeed, the winter solstice for 2019 falls on the 22nd.

For centuries, the winter solstice has been celebrated by various cultures as a time of hope and renewal, since it marks the start of the sun's "return" when daylight gradually grows longer. Among the international festivities that honor the solstice, according to Time, are sunrise gatherings at England's Stonehenge and Ireland's Newgrange ancient burial mound. In Austria, folks dressed like the hideous evil spirit Krampus prowl the streets to cause mock terror. The Halloween-like event is thought to drive away bad luck for the new year.

Some of the traditions we associate with Christmas actually come from the pagan customs of Yule, such as decorating with evergreen trees and bushes and hanging mistletoe as a good-luck symbol. The burning of the Yule log is a custom that originated in Norway, according to ThoughtCo. It, too, represents the return of the sun and the promise of brighter days to come. Some families write down their wishes for the coming year and put them on the Yule log before setting it ablaze.

The beginning of winter is considered a time to clear away unnecessary clutter in order to make a fresh start. Some residents of Japan perform a cleansing ritual that incorporates a healthy touch: soaking in a hot bath infused with a citrus fruit called yuzu. And, as befits a time of giving, ThoughtCo added that it's a Pagan custom during the solstice to donate food, clothing, and other items to charity. Blessing the donations before turning them over is a way of honoring both the recipients and the occasion.

Now that you know how long we have before the sun's position marks the beginning of winter, you can start saying goodbye to autumn (savor that last cup of pumpkin spice coffee) and prepare to welcome the new season on December 21 with light, a sense of renewal, and perhaps a bit of gingerbread.

More Like This
Where To Go Leaf Peeping In The U.S. In 2022
Tips For Apple Picking With Kids
These 2022 Halloween Squishmallows Are So Cute, It’s Scary
14 Top Gun Costumes For The Whole Family To Buy Or DIY