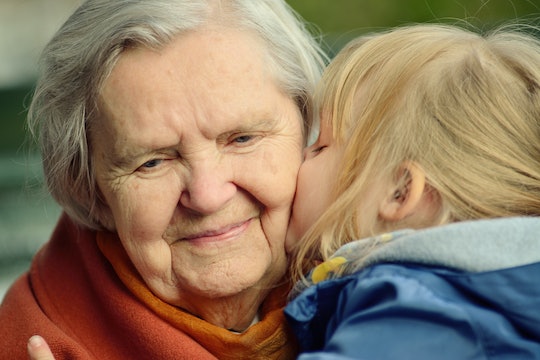 Susan knew exactly what she was doing when she bought Madison that Ariel lunchbox. Photo credit: Shutterstock

When Grandmas Duel, We All Win, Don’t We?

Dueling mothers and mothers-in-law during wedding season or — gird your loins — the first Christmas you try to spend with your partner, are the stuff of legend. But nobody talks about what happens when you have a baby. Nobody talks about the dueling grandparents and their thirst for blood — blood being the love of your child, obviously. It's not enough for your kid to be happy to see Grandma. They have to be happier to see Grandma than to see Nana, and if that's not happening fast enough, they'll take their feud to the next level: the comments section of your latest Facebook album.

This is one parenting battle I'm frankly happy to witness. I have no horses in this race! My kids get a bevy of attention, and I get something epic to spectate. Watching two grandmas compete for the ultimate title is like taking in The Battle of Winterfell, but instead of zombie dragons taking on the North, it's a group of grandmothers carrying in plastic crap from The Dollar Tree and new clothes from The Gap with a shriek of "LOOK WHAT GRANDMA BOUGHT YOU!" Impressed? Someone's also wielding a giant Costco pack of chocolate chip cookies like an axe, cutting through all of the Hallmark nonsense in their quest for ultimate grandparent status.

It starts slow. Maybe it's your baby's first Christmas and there's been a "joke" made. Something like, "Tell Grandma Debbie she can't hog you all night, because Nana Mary wants a turn, too!" These are always directed at the baby, as if their little lump-of-sugar self can somehow stop the grabby hands of grandmas at Christmas. It's innocent enough. Everyone laughs. Maybe Grandma Debbie quips back something like, "Tell Nana Mary she only lives five minutes away from you and sees you all the time, so she can just hush," because Grandma Debbie has to travel from out of town. Everyone laughs again! But the laughter is now edged with nervousness. Oh. Oh dear.

You can take your mother-in-law's son to your house for Thanksgiving, but dammit, the toddler can't be expected to eat Grandma Debbie's mashed potatoes over Nana Mary's roasted parsnips. He can't.

And then your baby's a toddler, officially on the move, and Grandma Debbie has bought them their first pair of shoes. You post a picture on Facebook: Look at their brand new shoes! Their first little tennies! "Thanks Grandma Debbie," you write. You're grateful — new shoes are expensive! — and it was so nice to get them in the mail, so nice to have a grandmother who cares.

But Nana Mary comments. "Oh how adorable. I just love that sweet grandbaby of mine. I think he looks just like my father in this picture. No confusion on which family he belongs to! Is he supposed to be wearing shoes already? I heard shoes can stunt their walking skills!"

What is it about the love of grandmas that makes them so good at pastry crusts, and Real Housewives-level petty when it comes to sharing the love of their grandchildren? Getting married and changing your family's traditions is one thing — getting married and changing your family's traditions while also adding new little people into the mix is another. You can take your mother-in-law's son to your house for Thanksgiving, but dammit, the toddler can't be expected to eat Grandma Debbie's mashed potatoes over Nana Mary's roasted parsnips. He can't.

And God forbid one grandma show up to a child event that the other one can't make. "I see Nana Mary made it to his Christmas party at school. Must be nice to have so much free time," Grandma Debbie will call you to say at 7 in the morning after she's checked Facebook. "They do live so much closer to you," she'll say with an air of resignation (she chose to live in Florida and wear nautical stripes and gold anchor jewelry year-round!), "of course he's going to be closer with them."

They'll gush about each other — 'I love this dress you're wearing!' 'Your new haircut looks so good!'

But then you'll host a big family dinner, and Grandma Debbie and Nana Mary will drink too much. They'll gush about each other — "I love this dress you're wearing!" "Your new haircut looks so good!" — and you'll find yourself wrangling the chocolate-covered toddler alone in the kitchen while they polish off a bottle of wine. You'll look at them, wondering what happened to those overbearing, constantly-comparing grandmothers. And they'll smile back and say, "Oh, I remember those days. So exhausting, right?" and pour another glass.