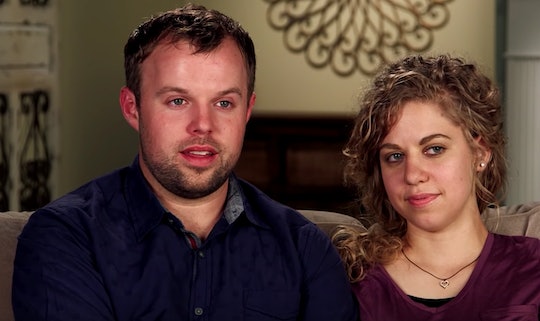 Counting On fans were elated to find out that yet another Duggar baby is on the way. On Thursday, John David and Abbie Duggar announced they're expecting their first child together. And although the happy couple hasn't shared many details about their upcoming bundle of joy, if you're wondering when Abbie Duggar is due with their child, there are some clues from their announcement that could help point to when their baby-to-be will arrive.

The couple took to their shared Instagram account on Thursday to share their exciting news with the rest of the world in a new post. In the photo, John and Abbie pose in an airplane while holding a onesie that says "baby passenger on board."

"We are on cloud nine about welcoming our own little Duggar into the world!!!," the couple wrote in the caption of the post. "It really is amazing to think about being parents and having our own child to raise."

Beyond the initial excitement about their announcement, the couple did not reveal any other details, like the due date or the baby's sex. However, fans of the couple can infer Burnett's due date, based on when other members of the Duggar family are due with their upcoming additions.

Joseph and Kendra Duggar announced in April they're expecting their second child together. And two months later, the couple took to Instagram where they revealed two major details: they're having a girl and she is due in November.

Josiah and Lauren Duggar made their pregnancy announcement in May, and announced in June that they're expecting a girl. Given that the anatomy scan happens at 20 weeks, or around the four month mark, according to Parents, it's likely that Lauren is due sometime this fall, perhaps in October or November, though she has not said for sure.

Given that both couples made their announcements three and four months before John David and Abbie did, one could argue that Abbie's due date is late than Kendra and Lauren's. With that said, it's seems likely that fans will be able to meet John David and Abbie's newest addition in early 2020, or possibly at the very end of this year, according to The Hollywood Gossip.

In a video announcement filmed for TLC, John and Abbie revealed that they found out that they were expecting in an unlikely way — at an urgent care facility. "It's not the way she had planned to find out," John David said in the video.

It's also very unclear if the couple knows what they're having, whether they're keeping it a secret, or if it's just too early to tell. "When it comes to the gender, I think it could go either way," he said in the video. "I've been thinking girl for a very long time, but it could be a boy and I'm kind of telling myself it's a boy." "I've been guessing girl," Abbie added.

No matter the sex or the baby's due date, the parents-to-be are clearly very happy about the news. "We're just thrilled and excited for the next step in our little family," he said. And Counting On fans are just as excited for them to welcome their bundle of joy, whenever that may be.