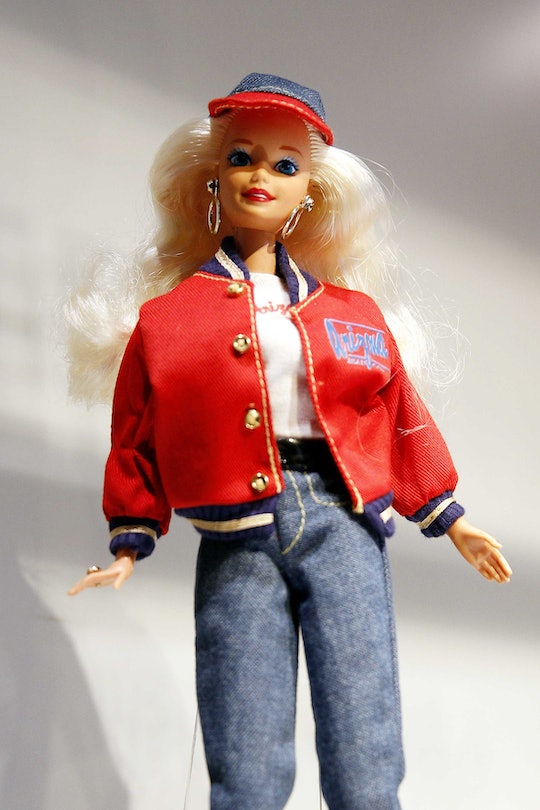 When Is Barbie's Birthday? Her 60th Is Just Around The Corner

This year, Barbie is celebrating her big 60th birthday, and there's not a wrinkle or gray hair in sight — talk about #AgingGoals. The famous doll has been a fixture in toy boxes since her debut in 1959, and she's got the storylines to show for it. Here are all the important details about Barbie's big 60th birthday, which is on March 9, and how Mattel is celebrating the milestone.

The world was first officially graced with Barbie's presence at the American Toy Fair in New York on March 9, 1959, according to History.com. Created by Mattel co-founder Ruth Handler, per Barbie's official website, the doll was named after Handler's own daughter who loved spending her free time playing with paper dolls. Handler got the idea for a three-dimensional version of these paper dolls, and Barbie was born. "My whole philosophy of Barbie was that, through the doll, the little girl could be anything she wanted to be," Handler stated. "Barbie always represented the fact that a woman has choices."

In her 60 years of existence, Barbie certainly hasn't slowed down. She can list astronaut, journalist, scientist, firefighter, doctor, and even Presidential candidate on her resume – and that's just the tip of the iceberg. Notably, she took on many of the titles during times when females were largely outnumbered in these fields. For example, "In the 1970s, Barbie saved lives in the operating room as a Surgeon, at a time when few women were applying to medical school," according to Barbie Media. Barbie isn't one to be scared off by a glass ceiling.

To mark the special event, Mattel is releasing a variety of special new Barbie dolls. (Barbie would never let something as silly as age slow her down, after all.) The brand is releasing select Barbie career dolls, which include professions like news anchor, soccer player, astronaut, and pilot. Actually, these careers (or similar ones) have been represented before, but they are getting fresh updates this year. Recently, Mattel also announced big additions to its Barbie Fashionistas line. In an interview with Teen Vogue, Mattel's vice president of Barbie Design Kim Culmone stated, "We’re going to be introducing a doll in a wheelchair and a doll representing physical disabilities. She has a prosthetic limb. [There will be] additional body sizes — a Barbie with a smaller bust and less-defined waist. A wheelchair or doll in a wheelchair was one of the most requested items through our consumer ... hotline." The brand is placing an emphasis on inclusivity, and after 60 years I'd say it's about time.

Barbie is exploring more than just new careers in her golden years, though; she's ready to explore the entire globe. In January of this year, Mattel announced an international licensing agreement between Barbie and National Geographic, and upcoming products and content that will focus on "exploration, science, conservation and research," according to the brand's official statement. As Susan Goldberg, the editor-in-chief of National Geographic magazine, explained in the release, "Helping people understand the world is, and always has been, the core purpose of National Geographic. Through our partnership with Barbie, we are excited to reach kids in a new way, using the power of play to inspire our next generation of explorers, scientists and photographers."

Of course, what's a birthday without at least a little bit of glamor? Mattel is also releasing a 60th Anniversary doll, designed with a diamond theme to commemorate her diamond anniversary. She's decked out in a shimmering ball gown, and rocking red lipstick, and a sleek up-do, and available for $60.

Barbie's longevity is an impressive feat, and it's hard to believe she's been around for 60 years. In a world of Baby Sharks, Fingerlings, and Hatchimals, it's not often that a toy sticks like Barbie has. And, with so many new professional endeavors and strives for inclusivity and representation, I don't think the toy is going anywhere soon.