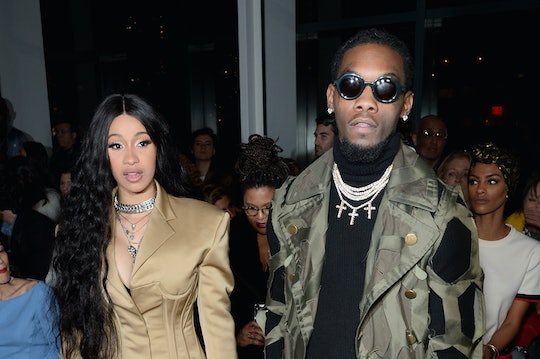 Cardi B *Officially* Confirmed Her Pregnancy On 'SNL' & Here's When Baby No. 1 *Could* Arrive

In Cardi B's hit song "Bodak Yellow," she sings, "I don't dance now, I make money move." But what she will be singing in a few months is, "I make mommy moves." OK — so my way with words exactly isn't on par with Cardi B herself. But in case you missed it, following months of speculation and rumors, the rapper confirmed that she's expecting her first child during an appearance on Saturday Night Live when she revealed her bump on stage. Now you might also be wondering when Cardi B is due, because this baby's arrival could not come soon enough.

This is a super exciting time in Cardi B's life. She just released her debut album, Invasion of Privacy, on Friday and got engaged to her then-boyfriend, now-fiancé, Offset, in October. But her life is about to change even more now for the better with a baby on the way. During her appearance on Saturday Night Live, it was impossible to ignore her pregnancy bump, which confirmed the news, according to E! News. Needless to say, people were pretty excited about that.

But now that the news is out in the open, people are dying to know more details about Cardi B and Offset's baby-to-be, which will take a spot in the royal hip hop dynasty. While Cardi B hasn't officially said anything about her due date, according to the all-knowing TMZ, the baby is reportedly due this summer.

The rapper is reportedly around seven months pregnant (you read that right, she's likely in her third trimester), according to TMZ, and due in the first week of July. This means her due date is fast approaching and she will be pregnant while performing at Coachella this month. But until Cardi B confirms when she is due, fans will have to hold out on knowing when they can get the first glimpse of her baby.

Diehard Cardi B fans have been waiting what feels like months for this confirmation to finally arrive. People had been speculating since February that Cardi B was pregnant and expecting a child especially since Cardi B's team reportedly told a night club staff that she was pregnant in early February, according to TMZ. To raise suspicions even more, in an interview before her album's release, Cardi B hinted that her new album addressed the pregnancy rumors, according to Us Weekly. Some fans thought that her song, "Money Bag" claims that she is pregnant with twins.

For fans it seemed like Cardi B would pull a "Kylie Jenner" and refuse to confirm, deny, or comment on her pregnancy until she was forced to do so or the baby finally arrived. But there are some things that can't be concealed or hidden by a tutu dress or loose fitting clothing over the course of nine months, which is probably why Cardi B's bump made its big debut on Saturday night.

Cardi B herself is pretty excited that she no longer has to keep things hidden. Cardi B reportedly stated "I am finally free!" after her SNL performance, according to E! News. The fact that Cardi B chose to announce her pregnancy in such an epic and adorable way makes this news all the more exciting. Fans have kept up with Cardi B as she rose to stardom from debuting "Bodak Yellow" to releasing this new album. And now they will continue to keep up with her as she begins her journey through motherhood.