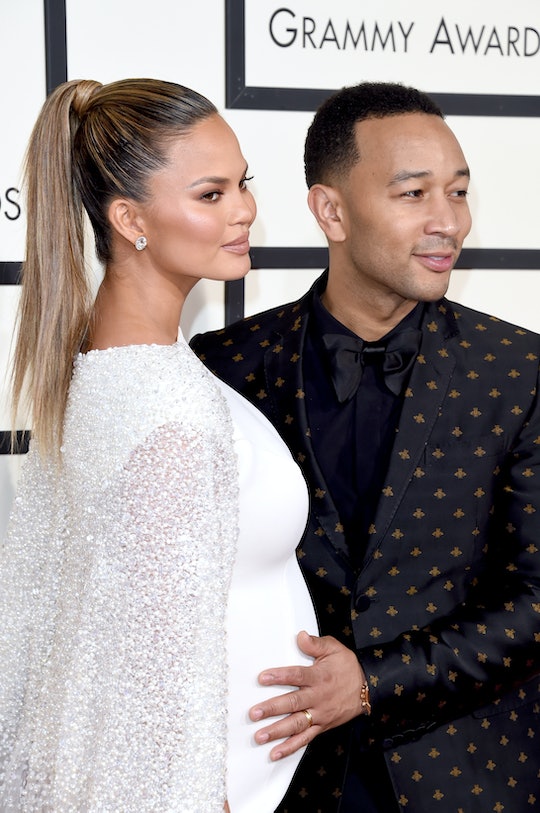 When Is Chrissy Teigen Due? She & John Legend Are Adorable Together At The Grammys

Although the performances and the awards are important, it's easy to argue that the red carpet is the most important part of the Grammys. Not only was it unusually warm for Los Angeles in February, but it was also the couples attending music's biggest night who were (unsurprisingly) scorching hot. John Legend and Chrissy Teigen were beautiful , as always, and with her visible baby bump, many people were left wondering, "When is Chrissy Teigen due?" (Trust me, you're not the only one.)

The model looked stunning as her gown not only failed to hide, but proudly accentuated her pregnant belly. Legend seemed to beam with pride (as he should) as he stood beside her, and the two joked about whether or not their soon-to-be daughter would be more of an "award" or a "curse" because, as Teigen put it, "We don't know her personality yet." (Fair enough.) It's so obvious that the two are very much in love and very much looking forward to becoming parents, and I could't be more thrilled for them. Teigen seems like one of the most town to earth and personable stars, and together with Legend, the two just seem like normal people. (And TBH, I think when you're that famous, being "normal" is very much a compliment.)

Thankfully, they (and the rest of the world) won't have to wait too much longer. Chrissy and John have not released an actual due date, but have hinted that their baby girl will make her arrival sometime in the spring. The clock is ticking and pretty soon, there will be another Teigen-Legend crewmember for us all to admire.

Not only are these two #RelationshipGoals, they're about to be #ParentingGoals too.