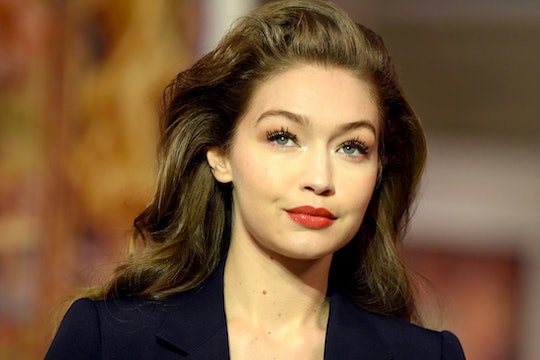 Not long after sharing her stunning maternity shoot with her 57 million fans on Instagram, Gigi Hadid has now hinted at when she's due to give birth to her first child with Zayn Malik. And it looks like their little one could be here in a matter of weeks.

Last week, the 25-year-old model shared a batch of photos from her maternity shoot on Instagram that perfectly highlighted her bump's silhouette. "Cherishing this time," Hadid captioned one of the photos.

And five days later, the model shared a few more photos, even giving her followers a behind-the-scenes look at the photo shoot, which was done about a month ago on July 26. But for one of the photos shared on Monday, Hadid captioned it "33 weeks."

The latter theory would make more sense considering that Hadid's mom, Yolanda, told Dutch news outlet, RTL Boulevard in April that she was "excited to become Oma in September."

So Hadid could be expecting her first child within the next two to seven weeks, but fans won't know for sure until she, or her mom, announces her exciting news herself

Beyond this photo shoot, Hadid has chosen to keep much of her pregnancy private; she told fans over the summer fans during an Instagram Live that she just wanted to "experience it" and not worry about "having to look cute or post something" about her pregnancy.

As for her maternity shoot, Hadid revealed on Twitter that it wasn't easy to do. Over the weekend, Hadid tweeted that while she loved taking these pictures, it "was definitely more tiring than working normally."

"Got through the second look and was like 'guys I think I can only do two more' hahaaa," she tweeted.

It's a good thing that she was able to power through the shoot because these are photos Hadid will surely treasure forever whether her little one arrives in September or October.