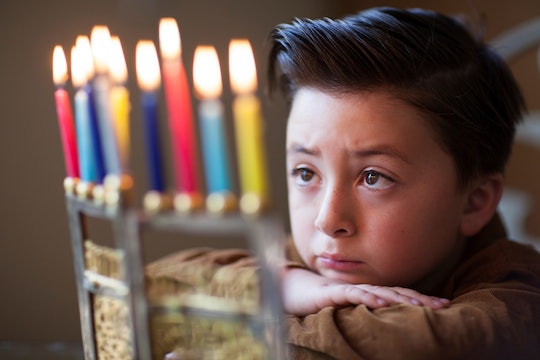 Hanukkah Is Later Than You Might Think This Year

You know what's harder than keeping up with the Kardashians? Keeping up with when Hanukkah falls every year. When is Hanukkah 2019? Christmas celebrators have it easy; they just have to remember December 25 every year, and it's not even hard because everything closes in honor of the holiday. Hanukkah, on the other hand, is on a different secular calendar date every year, so you've gotta be on top of your game if you want to have enough time to prep for eight days of gifts.

This year, Hanukkah begins at nightfall on December 22 and ends at nightfall on December 30, according to Chabad — so the holiday will overlap with Christmas. That's pretty late for the festival of lights (remember that year Hanukkah fell on Thanksgiving? That was just a one time thing, though, according to Huffington Post). Hanukkah ends up on a different week every year because the holiday is scheduled according to the Jewish calendar rather than the secular calendar in everyday life, and the Jewish calendar is actually lunar instead of solar, as Hanukkah Fun reported.

As the holiday is on the same day of the lunar calendar every year—it technically begins on the eve of the 25 of Kislev every year, the ninth month of the religious year, Chabad explained, and then lasts eight days — but the date ends up being a different week of November or December each calendar year because of the whole solar versus lunar thing. So even though it seems like Hanukkah comes earlier or later at random, it's actually at the same time; you're just looking at the wrong calendar. The more you know.

So the moral of the story is that Hanukkah is very soon, so you should probably get your eight days of gifts ready if you haven't already. On the bright side, you do have over a week of present-giving in your future, so it's not the end of the world if you haven't been prepping; you've basically got an extra seven days built in to get your holiday shopping done. Plus, presents are honestly a small part of the tradition. Many people refer to Hanukkah as the Jewish Christmas because gift giving is part of it, but that's pretty reductive to all that Hanukkah represents (please see this hilarious and helpful wikiHow on how to explain the difference between the two).

You'll honestly need more prep time to get all the Hanukkah food and traditions in order than the gifts. Pretty much every part of the holiday is symbolic, Metro explained, of the miracle of a candle burning for eight days when there was only enough oil to keep a flame for one day after the Maccabees won their right to religious freedom back. Yet the candle burned for eight days, giving birth to the festival of lights. The celebratory foods, like potato latkes and sufganiyot, traditional jelly donuts, are cooked in oil in reference to the story, which makes them even more delicious. (Psst: check out some yummy kosher recipes you can make for the festival here).

Whether you're prepping Hanukkah gifts or festive foods, the countdown is on.

This article was originally published on November 27, 2018